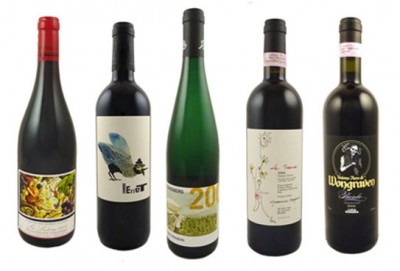 While they say it’s not good to judge a book by its cover, we admittedly sometimes do, and the same goes for wine bottles. But maybe there’s something to this little visual enticement. After all, I’ve enjoyed quite a few books and bottles that have drawn me in with their elaborate designs or simple typography. With this in mind, our Digital and Design team here at Astor Wines & Spirits has compiled a list of our favorite wine labels for your visual enjoyment. Bonus? They’re all delicious. Have a favorite Astor Wines & Spirits label? Share it below!

Aside from being a fantastic wine, this bottle has one of the most interesting and thoughtful designs I’ve seen lately. The name of the winery, Batterieberg, refers to the fact that it is located on a rocky outcropping where a hill was dynamited in the 19th century. Whoever put this together cleverly references that fact by creating a logo of a Riesling bottle as a cannon, repeated on the foil as well as on the actual label, where two angelic cherubs fire the cannon over a picturesque vineyard. I love the weird juxtaposition of styles as well – the picture on the label looks like an early 20th century children’s book, but the vintage is slapped on in a bold military-style stencil typeface. I’m definitely saving this bottle!

I am a sucker for marketing sometimes. There’s a scene in Zoolander with a montage of Derek’s past campaigns. One of the clips used in the montage was for a Diet Coke campaign in which he poured a can out over his head in slow motion while shaking his head back and forth as if it were so refreshing he couldn’t help but completely soak himself in the diabetic friendly soft drink. Every time I see it, or think about it, I get this longing for NutraSweet originating somewhere between the bottom of my heart and my gut.

This slight flaw in my character manifested itself again in our Spain section the other day. While browsing through, looking for something to bring to a dinner party my gaze was arrested by this lovely and unique label and swiftly taken into its aesthetic custody. I was taken by its potpourri of different design elements that if I were to try and articulate would seem messy, but it works very nicely. I love it’s combination of almost vector like lines juxtaposed against it’s very humanistic use of watercolor as it’s palate. This identity is continued in its use of multiple typefaces for its name. I like how it almost seems like a hybrid of different designs which create a fun and cohesive visual, greater than the sum of its parts. I also like that the bird is wearing a hat.

I promptly took this chapeau’d piaf to my friend’s shindig in Bay Ridge where I of course popped the cork and proceeded to pour the bottle our over my head in slow motion. It was a weird night.

The Borsao bottle really caught my eye. When I first noticed it, I thought of the great pyramids of Egypt. The colors are warm and bright. I like how they shapes overlap to form different colors. The typography is simple and elegant. I hope this wine tastes as good as it looks!

This beautiful label catches my eye above all. The fact that this label is an illustration gives me all reason to fall in love with it. The elements and detail in the illustration also compel me. It takes me to a fantasy world, and it allows me to place the character in a story boundless of my imagination.

My grandfather- also known as Superman- recently turned 92. He’s a big chianti fan so I wanted to get him a special bottle for his birthday and I’d be lying if I didn’t say I chose this one because of its label. At first glance, as I was rushing out to catch my train, I thought I was purchasing a bottle with a lovely floral watercolor on it.

It wasn’t until I pulled the bottle out on the train ride to his birthday dinner that I realized these imagined flowers were actually what I now saw as a cyclops tree sprouting grapes and feeding Chianti into someone’s very happy stomach and heart. Naturally, I enjoyed this much more than the drawing of whimsical flowers I had first imagined and I was happy to see that it made my grandfather laugh.

I love this label because it’s both visually delicate and odd all wrapped up in one beautifully painted image – and one delicious bottle (kid tested, grandfather approved).

Because it reminds me of this: