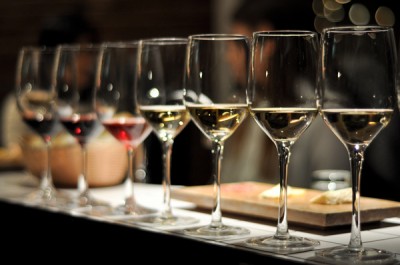 I can’t help but recall Sarah Jessica Parker’s character, the idealistic, ever-romantic Carrie Bradshaw, as I organize some thoughts about New York wine. I heart New York, in an unabashedly, arms-wide-open kind of way, having rediscovered the lakes, mountains, and valleys of this great state, all of the nooks and crannies taken for granted and overlooked by jaded urban-dwellers. I heart New York, as well, for its still-burgeoning vine-growing and wine culture, which has come a long way, and which demonstrates an energy and potential that other regions have outgrown. The Empire State produces wines with energy, enthusiasm, curiosity, and experimentation. These are regions cultivated by very likeable producers that one should get to know better.

Historically, grapes were cultivated and wine was made from the local “native” varieties, like Catawba and Concord: Vitis Labrusca, which lack the high acidity and flavor profiles of European varieties. Like the production of other alcoholic beverages, the production of wine essentially ceased during Prohibition. Afterward, grapes were cultivated for supermarket shelves, and the only wine of note became Manischewitz. The Farm Winery Act in 1976 permitted farmers to add a second outlet to sell off some of their product, allowing them to make and sell their own wine on their own property. New York’s push into the quality wine arena was born.

New York boasts three noteworthy wine-producing regions: The Finger Lakes, Long Island, and the Hudson River Valley. The Finger Lakes are New York’s coolest and largest region. The area is composed of deep lakes formed as glaciers receded a millennium ago; these lakes now moderate the local climates, cooling in summer and warming in winter, allowing for a sustainable viticulture. Cayuga and Seneca are the longest and deepest lakes. They do not freeze in winter, and this is where most of the wineries are concentrated. The region’s first serious winery was founded by Dr. Konstantin Frank on Keuka Lake in 1962. He believed that vine rootstock, rather than the cold climate, was the reason for failed quality wine production in the region. Riesling was the most obvious choice for winter hardiness, of course. Kevin Zraly of Windows on the World was an early proponent of Frank’s Rieslings and the Finger Lakes’ potential. At the winery’s tasting room, they will proudly tell you that the dry Riesling was on Zraly’s wine list from the mid-1970s until the towers came down in 2001.

Frank was on to something. Hermann Wiemer established his winery, with a similar mindset, but inspired by the Rieslings of German’s Mosel-Saar-Ruwer region. (Wiemer’s rootstocks came from around his native Bernkastel in the Mosel Valley.) Over the past 30 years, more and more local producers have sought to join these producers, experimenting with varieties other than Riesling, like Pinot Noir, Gewurztraminer, Blaufrankisch, Cabernet Franc, Dornfelder, and hybrids such as Seyval Blanc. Grüner Veltliner has been touted as the next big thing, but Riesling continues to reign. In dry, off-dry, semi-sweet, and sweet styles, Riesling is what people search for in the Finger Lakes; it demands and receives all of the best real estate in the vineyards and on the shelves. Originally, producers went dutifully to Cornell University, or followed instructions from UC Davis on “How to Make Wine 101.” Now, time and experience have brought sufficient confidence regarding what works for the terroir, even if that means not following the scientific script. All for the better, I think.

Long Island is the newest addition to wine production in New York. The first vineyard was planted in 1973 on the North Fork of the Island. Soon, hopeful viticulturalists and gentleman farmers snapped up what was then mostly potato farms and planted mostly Chardonnay and Bordeaux varieties–Cabernet Franc, Merlot, and Cabernet Sauvignon. The milder, more maritime climate seemed more suitable for these grapes. The South Fork has become well-known for more than just the Hamptons now, as perhaps the two most prominent producers on the Island are located there: Wölffer Estate and Channing Daughters. Christian Wölffer, who founded his vineyard in 1987, follows a more traditional script, with classic Bordelaise wines and a solid Chardonnay year in and year out. Channing Daughters, under the winemaking direction of Christopher Tracy, has made a name for themselves with more audacious blends of Italian grapes with French vinifera, and experimentation in the cellar with skin contact maceration on their white grapes, yielding bold orange wines. On the North Fork, one sees a style that is a bit more down-to-earth. An environmental responsibility is cemented within most producers’ sensibilities, owing to the fragile ecosystem of the Island. Many growers joined Rich Olsen-Harbich of Bedell Cellars, Larry Perrine of Channing Daughters Winery, and Barbara Shinn of Shinn Estate Vineyards in their efforts towards systemized practices geared towards preserving the local flora and fauna.

The Hudson Valley is still finding its own ground. I am encouraged by the excellent work of Millbrook and Whitecliff Vineyards, who, incidentally, prove that Traminette, a crossing of the French hybrid Seyval Blanc and the grape Gewurztraminer, can make a delicate, accessible, scrumptious wine.

For me, it is important to see where all this goes. New York will never produce the volume of California, so the pressure is on to show exemplary quality, though vintages are inconsistent; real estate, particularly on the East End, is expensive, and production costs are higher here than in the European Union. The particularities of New York’s varied terroir dictates that some grapes will thrive, while others will not, and this means a lack of diversity, which may not be a bad thing. Experimentation and hard work is paying off. I am inspired more by the passionate personalities who strike their own path and discover where the terroir takes them, rather than by the winemakers who shoot for a marketable style in the formula of Cornell University. I would encourage anyone to venture out on New York’s wine trails, as they can be a lot of fun. If you lack the leisure time to travel, Astor Wine & Spirits will always have an excellent selection of New York State wines, because we do, indeed, heart New York.