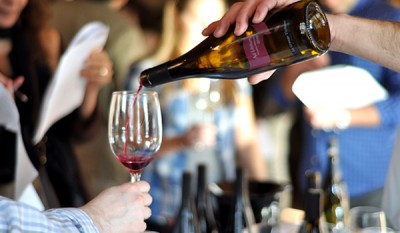 Our first Natural Wine Event, which we hosted 10 years ago, consisted exclusively of French winemakers: in attendance were winemakers from the Languedoc-Roussillon, Burgundy, the Loire Valley, and Champagne. Now, we bring in producers from Spain, Italy, California, and Oregon, from Jenny & François Selections. In the beginning, we conducted the event at the old store space, which was tight quarters, so we used to jam-pack the store, but it was a good time. Something that has evolved over the course of the past decade is that the impression of natural wines has changed for consumers and buyers alike. In the late ‘90s, the movement had just started. My understanding had just begun, I should say—the movement had started much before, of course, but I was just beginning to understand the depth of the movement. And what did “natural wines” mean, exactly? No addition of sulfur, no filtration, and a simple expression of terroir.

Simplicity, however, can have some minor consequences. Because they aren’t filtered or fined and because no sulfur is added, natural wines can be more susceptible to damage than conventional wines. Our old store did not have the temperature control system in place required to deal with these wines, so some of the bottles became compromised, and that led us to reevaluate our storage system when making our move to the new space. It became a huge priority when we established the new Astor Wines & Spirits on Lafayette in 2006. We now have a dedicated space for natural wines, which are all under temperature control. We have seen other striking changes, too. At the beginning, the winemakers absolutely refused to add any sulfur at all to any of the wines, a refusal that often had consequences in terms of shipping the wines overseas. Years later, they’ve understood that the introduction of infinitesimal amounts of sulfur at bottling can do a tremendous amount to preserve the integrity of the wines. Some winemakers today, it is important to note, do still hold fast to their beliefs and do not add any sulfur at all.

All these years later, natural wines are now a large cornerstone of the store and the Natural Wine Event continues to be one of my favorite tastings of the year. In 2006, we started hosting a dinner with the winemakers after the event—with our staff in attendance—at Astor Center. This is a tradition we continue to this day. Jenny and François are in town with their winemakers for a week of events in the city, and this dinner and the Natural Wine Event kick off their week of tastings. We drink the leftover wines from the tasting, but I also bring in a ton of wines from the store that are not affiliated with Jenny and François, so that the winemakers have an opportunity to taste some interesting wines that they haven’t otherwise gotten a chance to taste. We relax, drink, eat, and have a great time; there are literally 50 or so bottles of wine and we eat family-style. The winemakers easily drink 10 times as much as I can—or that’s my impression. It’s a great chance for the staff to ask questions of the winemakers and to become more familiar with some of the products that we carry.

Educating our staff has always been a top priority of mine, so while these dinners may be counted as leisure, they’re also part of making our program better. On a personal note, as far as natural wines are concerned, they’re what I drink in my free time. I don’t always believe that all natural wines are good, per se, but I believe in what they are in principle. And that’s who I am as a buyer: I want to support the little guys, whom I believe have a story, and integrity. Small producers tend to have more of a connection to the land and they make wines that are terroir-driven, which I think most wine drinkers can appreciate, whether they know it or not. I’ve also worked with Jenny and François—and importers like them—for many years, and I respect their products and what they do in the field, and I’m thrilled to be able to continue working with them in this capacity. Here’s to another great year of natural wines.

Some of our favorite organic, biodynamic and natural wines