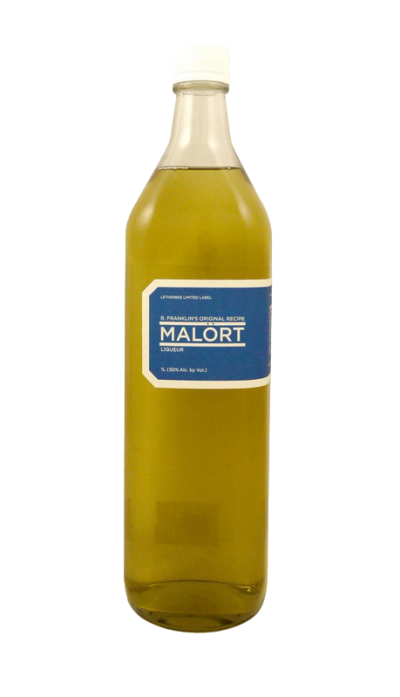 Malӧrt is the Swedish word for wormwood and is the key ingredient in the locally popular drink bäsk brännvin. Bäsk refers to a wormwood-infused alcoholic drink, which is typically supplemented with additional spices and herbs. Brännvin is the alcohol, the essential equivalent to Dutch brandewijn and English brandy, which means burnt or distilled wine. Swedish brännvin has a base of either grain or potatoes and is distilled and bottled at a lower proof than vodka. This not-totally-neutral (but still unflavored) spirit is the canvas for a whole host of different recipes, and many families have historically had their own versions. Because of periodic worldwide prohibitions of the use of wormwood in beverages there have been very few commercial bottlings of malӧrt available outside of Sweden.

Oddly enough, for the past century, the western world has been host to one other famous outpost for this infamous liqueur. In the 1920’s Swedish immigrant Carl Jeppson began making and selling a malӧrt in Chicago, based on his own personal recipe. Jeppson’s malӧrt became the only one available in the United States and has never been available outside of the Chicago area. The distillery that made Jeppson’s closed in the 1970s and its spirits are now made in Florida. Local Chicago residents have kept Jeppson’s strong drink alive as a point of pride for the tough-minded city. In 2013, the newly founded Chicago distillery Letherbee produced a small batch of 100-proof malӧrt, which was released in select markets. The artisan distillery began as a project between founder and local bartender Brenton Engel and a group of like-minded barkeeps, with the intention of making high-quality, relevant, small-batch, and sometimes seasonal spirits. Their malӧrt is dominated by intense aromas and very bitter flavors of wormwood. The addition of gentian provides another layer of bitterness, while juniper, star anise, and elderflower musk add richness, as well as a floral complexity.

Typically, malӧrt is stored in the freezer and consumed in one of two ways: as a shot as soon as one returns from work for a palate-cleansing apéritif and the ultimate pick-me-up; or as a shot after a meal as a proven digestif and/or cure for indigestion. Bars in the Windy City have been serving it up as shots to the brave few, and the legends of the shock-induced “malӧrt face”—a contortion resembling the face of someone who has just sucked an entire grapefruit pith—caused by the bracing nature of the juice has become a badge of honor. The Letherbee malӧrt is lower in proof, more complex, slightly sweeter, and better balanced than most traditional ones. Very gin-like in nature, but with the general profile and bitterness of traditional French bitters such as aveze, salers, and, more specifically, absinthe, this spirit is a dynamic ingredient for the individual looking to taste what was before unavailable or who wants to elevate cocktails to new heights.