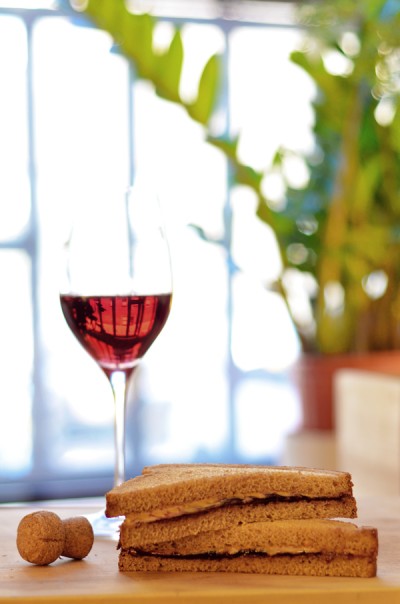 To kick off National Peanut Butter and Jelly Day, celebrated on April 2, I sat down with my Astor Design and Marketing Team colleagues to taste through some wines that I felt would pair well with this universal American treat. As for sandwiches, well, I had to include the standard PB&J, grape jelly and all, but I also upped the ante with an apricot jam specimen for an upscale, and—dare I say it?— more adult take on an old classic. The results were not unanimous, but they gave me a lot of latitude. Which is to say: if you were worried that your peanut butter and jelly sandwich was incompatible with wine, think again; I have you covered. 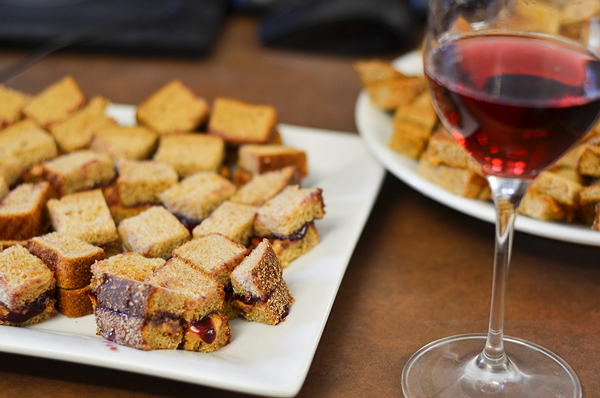 For the more traditional sandwich—Concord grape jelly, creamy peanut butter—I chose two red wines, one dry, one sparkling. The first was the 2011 Château de Lacarelle Beaujolais-Villages, which showed beautiful, ripe raspberry fruit on the nose and a brightness that one can expect both from the vintage and from Gamay, an often playful and uninterrupted variety. When paired with the sandwich, however, the wine’s lack of residual sugar seemed to force the fruit into submission, and the wine became muted. More successful was the Cantina di Sorbara Lambrusco Amabile, a stunning non-vintage red sparkler from Italy that had just enough sugar to highlight the candied quality of that Concord grape jam. It was a light, fun pairing, filled with grapey effervescence and the childhood ebullience that makes a person want to sit down and eat peanut butter and jelly sandwiches in the first place. Of these two pairings, the Lambrusco was the distinct winner, taking six votes of an overall seven. 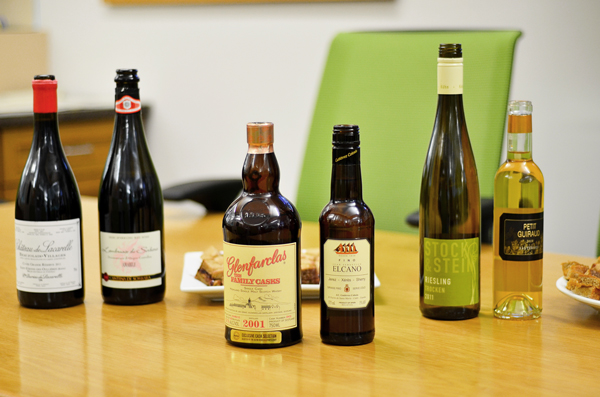 The apricot pairings were less polarizing. For the first pairing, I chose a bone-dry white from Germany’s Rheingau, the 2011 Jakob-Kühn “Stock & Stein” Riesling. On the nose, this wine was plenty expressive, with white flowers and stone fruit that mimicked the apricots from the jam. But on the palate, once paired with the sandwich, the main components that came through were the secondary notes of petrol. Once again, I found our second pairing to be the sure winner, the half-bottle of 2010 Le Petit Guiraud from Sauternes, a honeyed, rich expression that highlighted not only the fruit from the apricot but also the nuttiness from the peanut butter. In fact, this pairing was as effective, in my mind, as the iconic foie gras and Sauternes pairing, and probably for the same reasons, because it triggered the same sense memory: fat, sweet, and salt, all cleaned up with a bright dose of acid. Four members of our team opted for the Sauternes, while three voted for the Riesling, so this was certainly no landslide. 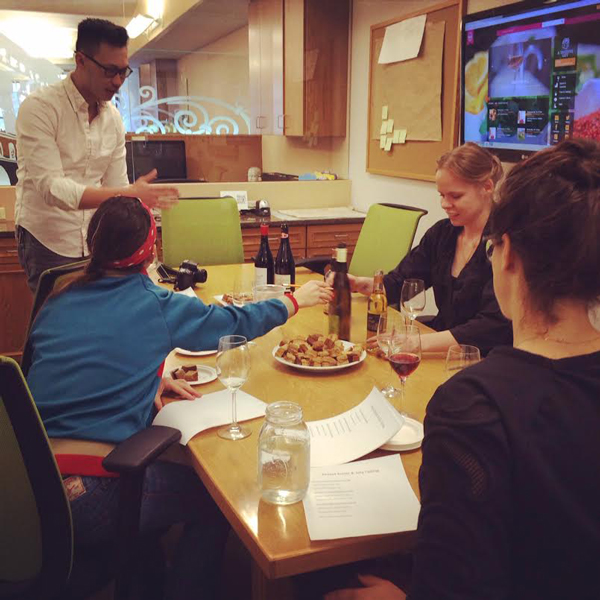 To close our tasting session, I chose one wine and one spirit that I felt could be paired with either sandwich. The first, the 2001 Glenfarclas Family Cask Scotch, had notes of caramel and baking spices on the nose, but the palate of this dram was a bit overwhelming for the delicacy of these sandwiches, which I felt were obliterated under the weight of the alcohol. A better pairing was the half-bottle of the Gutiérrez Colosia “Elcano” Fino Sherry, a saline, bright, and just barely nutty fortified wine that emphasized the nuances of the sandwiches—in particular, the apricot—and that brought out the saltiness, fat, and richness of that old, perennial favorite: peanut butter. Concerning these pairings, our team voted in favor of the Sherry, four to two.

As for the overall tally, it was a tie between Sauternes and Sherry for all-around winner of best PB&J pairing, but the real lesson was this: that good old sandwich, relegated to children’s lunchboxes everywhere, can be elevated to an important and wine-worthy treat. Just give it a little of your much-deserved attention, and pop the cork on something nice and join us in this nod to National Peanut Butter and Jelly Day.