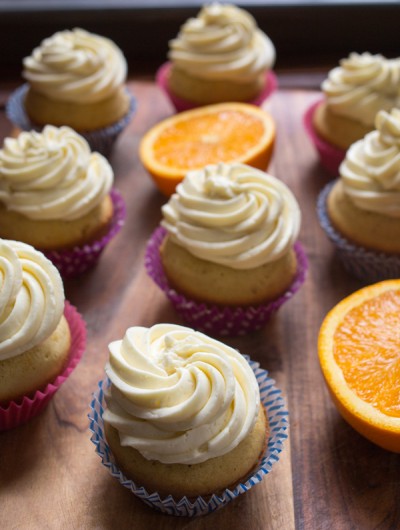 In the spirit of exploring the uncharted—at least, as far as my kitchen is concerned—I dug up a bag of licorice root I bought a while back. My experiment went awry, though, when I was able to extract only a little flavor from the hard, dry sticks. I’m not sure if they were too old or if my method was faulty; either way, my initial urge to branch out still remained. To satisfy my craving for a licorice-flavored sweet, I turned, alternately, to anise seeds.

While this flavor combination is not new to my kitchen (I love a refreshing orange segment and fennel bulb salad), I’ve never tried it in a dessert. So, anise and orange cupcakes were born. The intriguing and bright flavors of licorice and citrus make a plain, yellow cake more exciting, while the anise-infused Italian meringue buttercream serves as a silky, sophisticated topper.

Anise and Orange Cupcakes
Adapted from The Art & Soul of Baking

Directions:
1. Preheat the oven to 350 degrees F and grease a 12-muffin tin or line with cupcake liners. In a medium bowl, whisk together the cake flour, baking soda, and salt.
2. In the bowl of a stand mixer fitted with a paddle attachment, cream together the butter and sugar until light and fluffy. Reduce the speed to low and add the eggs, one at a time, and the vanilla until just incorporated. You may need to use a spatula to scrape the sides of the bowl.
3. Keeping the speed of the mixer on low, beat in one third of the flour mixture, half of the sour cream, another third of the flour mixture, the remaining sour cream, and, lastly, the final third of the flour mixture. Stir in the anise seed and orange zest.
4. Divide the batter evenly between the 12 cupcake wells (about 1/4 cup of batter each). Bake until a toothpick inserted into the center of a cupcake comes out clean, about 15-20 minutes. Cool fully before frosting with the anise Italian meringue buttercream (recipe below).

Directions:
1. In a small pot, stir together the crushed anise seeds, sugar, and water. Bring the mixture to a boil over medium-high heat and cook for a minute before turning off the heat completely. Steep the anise seeds until the mixture has fully cooled. Strain the anise seeds from the simple syrup.
2. Return the syrup to the pot over medium-high heat and cook until a candy thermometer reads 240 degrees F.
3. Beat the egg whites in a stand mixer fitted with a whisk attachment just until stiff peaks form. With the mixer running on high speed, drizzle in the anise simple syrup. Continue to whisk for several minutes, until the mixture is no longer steaming.
4. While whisking, add the butter, one piece at a time. Add the vanilla. Continue whisking until the mixture is smooth and firm enough to pipe. You will likely not need all of the buttercream to frost the cupcakes.

Hannah’s Pairing Suggestion:
Ramazzotti Amaro
I can’t think of a more appropriate pairing for these anise-inflected cupcakes than the Ramazzotti Amaro, an Italian herbal liqueur commonly consumed after a meal as a digestif. This iteration is made from both orange peel and anise, and though it is bitter on the front palate, the finish is palpably sweet, with notes of candied black licorice, citrus, and chamomile tea. One rule of thumb in wine-pairing is to pair similar flavors, which is what makes this combination such an abject success.