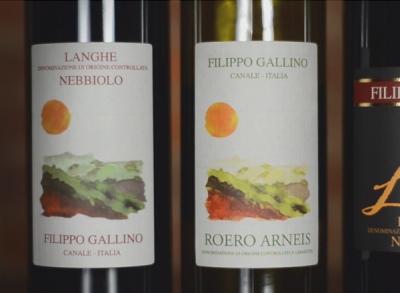 Our head wine buyer Lorena Ascencios is always excited about Italian wine. Check out the video to hear her views on what makes Fillipo Gallino, a small family winery located in Piedmont, unique.

Roero Arneis, Filippo Gallino – 2012
The Arneis grape makes some of the most enjoyable white wines in Piedmont. It’s redolent of pears, chamomile, and white flowers. Always enjoyable with light meats, but incredibly well-suited for fish as well. Filippo Gallino winery was the first winery in Piedmont to make a 100% varietal Arneis wine in 1972. From Arneis vines grown on tufo soils. Unoaked.

Langhe Nebbiolo, Filippo Gallino – 2012
To get a glimpse of the beauty of Nebbiolo, turn to your basic–but by no means simple–Langhe Nebbiolos.This bottle is a benchmark: rose petals, licorice, and a delicacy that’s reminiscent of Pinot Noir. Unoaked, and a fantastic staple for any household.