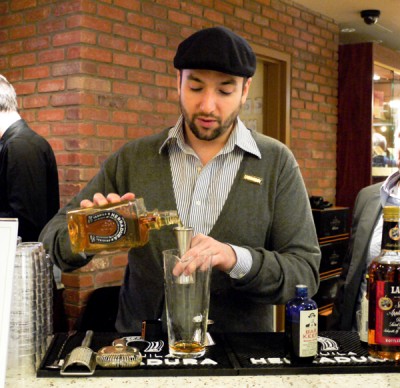 Monday night marked the first installment of our US Bartenders Guild Master Series. Marshall Altier, the man behind the cocktails at JBird and countless other projects, kicked us off with some amazing cocktails using his own Baked Apple Bitters. Before he took rein of our tasting bar, he was kind enough to do a little Q&A with us…

Tell us about the cocktail you’re making tonight.
We’re making an Otoñal (Autumn) Old Fashioned. We’re using the Herradura Añejo Tequila because it has those notes of baking spices, our own Baked Apple Bitters, and some simple syrup that we’ve made with cinnamon sticks and turbinado sugar. We’re also serving a hot Cider with the baked apple bitters, lemon juice, and some fresh whipped cream that we combined with some of the bitters.

How did you first get into bartending?
My grandparents owned a bar in Canton, OH, so I’ve been around bars all of my life and worked in restaurants from a young age. After working as a waiter, and in the film business for a while, bartending was sort of the natural next step and I just started learning everything I could.

What’s the strangest drink request you’ve ever received?
Honestly, the thing I find people ask for most often is a cocktail without sugar. I have to walk people through the fact that a mojito just won’t taste as good without the sweetness.

What’s your winter spirit of choice?
Brown spirits. Whiskies, aged rums and tequilas. I tend to sip drinks neat more in the winter.

What 90’s sitcom character are you?
Oh man, I have no idea. I’ll have to get back to you on that one.

Favorite meal?
I could eat curry every day for the rest of my life.

Want to ask a bartender a question? Comment below and we’ll ask them for you.

Next Monday evening, Jason Littrell (of Dram and Death & Co.) will be joining us at the bar. Jason will be mixing up the incredible “Behind God’s Back” cocktail, made from cinnamon syrup, orgeat, cane syrup, lime, pineapple, bitters, mint, and Chairman’s Reserve Rum. Hope to see you there!