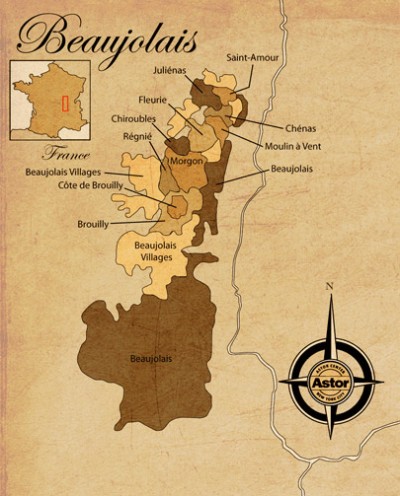 Beaujolais wines are on sale today and in case you’re in the dark about the delicious wines from this region, here is your Beaujolais 101:

The Beaujolais region (technically part of Burgundy) is beloved for its juicy, fruity, affordable, young-drinking red wines made from the Gamay grape. Some age-worthy reds are made in Beaujolais as well, along with a few rare and delicious whites.

Beaujolais is the classic expression of the Gamay grape. These red wines (labeled simply “Beaujolais”) are approachable, grapey, and fun; they are ideal for low-pressure sipping. Our #1 wine is an exceptionally drinkable example of straight Beaujolais: it pairs best with poultry and good friends.

Beaujolais Nouveau is perhaps the most gulpable wine made anywhere, and it should be drunk very soon after it is released – on the third Thursday of November each year. The arrival of Beaujolais Nouveau is always eagerly anticipated, because (some say) it gives an idea of the quality of the vintage to come.

Beaujolais Blanc is made from Chardonnay, and, as in many wine regions, the winemakers capitalize on the Chardonnay grape’s versatility by making these whites in a wide range of styles. Beaujolais Blanc, Ch. du Chatelard is unoaked and ripe, and it serves as a brilliant introduction to white Beaujolais.

Cru Beaujolais is the highest quality designation in the region, and the most exciting bottles of Beaujolais tend to come from the ten Beaujolais Crus.

Each of these appellations has its own distinctive character. Here are a few of our favorite Crus:

Brouilly – Physically the biggest of the Beaujolais crus, Brouilly also makes some of the biggest wines: burly, structured, and sometimes even age-worthy. This Brouilly, made from 50-year-old vines, is so marvelously intense that it must be tasted to be believed.

Fleurie – In the vast, sometimes baffling world of wine terminology, you will rarely find anything this easy to remember: Fleurie makes flowery wines. Enjoy that – and enjoy this age-worthy, medium-bodied, floral Fleurie.

Morgon – With a bit of aging, sometimes a great bottle of Beaujolais will come to resemble a great red Burgundy. This happens so often to the wines of Morgon that the French word for the process is “morgonner.” (You know you’ve really made it as an appellation when people start using your name as a verb.) Try this powerful, earthy example. It’s a delicious wine, but it’s only a 2009 – so it hasn’t started to morgon yet.

Moulin-à-Vent – These wines are among the most prestigious in Beaujolais. Often concentrated, they tend to age extremely well. “Clos du Tremblay” Moulin-à-Vent from Paul Janin et Fils has that distinctive cellar-worthy structure, and it is drinking quite well right now.

The remaining seven Crus are Chénas, Chiroubles, Côte de Brouilly, Juliénas, Régnié, and St.-Amour… but in the interest of keeping Beaujolais fun, we’re stopping right there. Enjoy the sale!