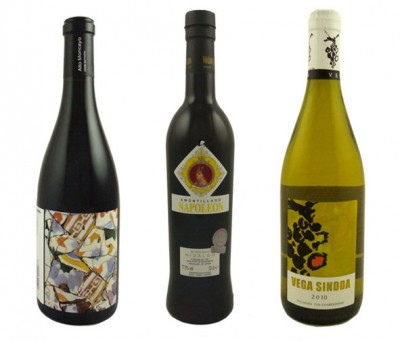 Today is a special day at Astor: we’re including Sherry in our Spanish wine sale! All dry and fortified wines from Spain are 15% off today.

Scroll down for an intro to dry Spanish wines, check out our handy Guide to Sherry, or head straight to the sale!

Rioja, the birthplace of Spanish winemaking, has been the benchmark for Spanish wines for over 200 years. Tempranillo is the main red grape here. Traditionally styled Riojas are subtle and soft, and often have high levels of acidity to ensure their survival through a lengthy aging process. Modern Rioja producers are making powerful, dark, fruit-driven, tannic wines, often with a pronounced bite from new French oak. One great way to learn about the different wine styles is to become familiar with specific producers, so don’t be shy about asking our sales staff for advice.

We love the wide variety of white Riojas as well: Viura is the main grape in the modern white wines produced here, but traditionalists (such as López de Heredia) still use a good deal of old-vine Malvasia as well. Many of these traditionally made wines are intentionally oxidized, resulting in an array of fascinating and unique aromas reminiscent of vin jaune or Sherry.

This region is home to one of the most famous Spanish wines in history: the incomparable Vega Sicilia. Indeed, for the better part of the twentieth century, Vega Sicilia was the most expensive wine in Spain, and the country’s major claim to fame on the international market. It wasn’t until 1972 that other winemakers began to creep into the region, but Ribera del Duero is now home to a wealth of fabulous Tempranillo-based wines that consistently garner critical acclaim throughout the wine world. The climate here creates a more robust expression of the grape than that typically found in Rioja, with deeper concentration, more tannin, and darker fruits. For exciting new wine discoveries, look to the neighboring Toro area as well. The Tempranillo-based wines of Toro are often just as plush, powerful, and elegant as the best Ribera del Duero has to offer.

Located near the Ribera del Duero region, Rueda is known for its delicious Verdejo-based white wines. Often blended with Viura and Sauvignon Blanc, these wines can range from light, floral, and crisp to richly textured and powerfully aromatic. For delicious quaffing wines, great as apéritifs or with ceviche, Rueda is a great place to look.

In the context of Spanish winemaking history, Priorat has only been around for a short time. Twenty years ago, this tiny region was completely off the wine map. After a handful of visionary winemakers moved to Priorat, this region in northeastern Spain quickly began producing some of the most powerful and complex wines in the world.

In 2003, Priorat was awarded the prestigious D.O.C. status – a distinction previously held only by Rioja – and ever since then, quality levels have soared. Garnacha (known elsewhere as Grenache) is the most widely planted grape in the region, with Cariñena (known elsewhere as Carignan) a close second. Most Priorat wines are blends, and many of these blends include “international” grape varieties such as Cabernet Sauvignon, Merlot, and Syrah. These are massive, modern wines, often with high levels of alcohol, yet they never fail to show poise, structure, and an unmistakable earthy undertone.

If you like the wines of Priorat, try a bottle from neighboring Montsant or the Costa Brava. These similarly styled wines offer some of the best bang for your buck in Spain.

Just slightly inland off the Mediterranean Sea, this warm-climate region is the ideal home for the red Monastrell grape (known as Mourvèdre in France). Wines from Jumilla are generally ripe and jammy, with loads of dark berry fruit intertwined with notes of baking spices, chocolate, and tea. These versatile food wines are a great accompaniment to anything meaty.

Located on the northwestern coast of Spain, just north of the Portuguese border, Rías Baixas is home to the famed white Albariño. This grape yields deliciously refreshing white wines, typically offering aromas of peach, apricot, and melon, with steely minerality and a lean, crisp finish. Not to be overlooked is the neighboring D.O. of Txakoli, the source of many equally fabulous dry white wines. Both Txakoli and Rías Baixas produce bracing, fresh wines that are outstanding with shellfish.

Check out our entire Spanish selection –
including Sherry!