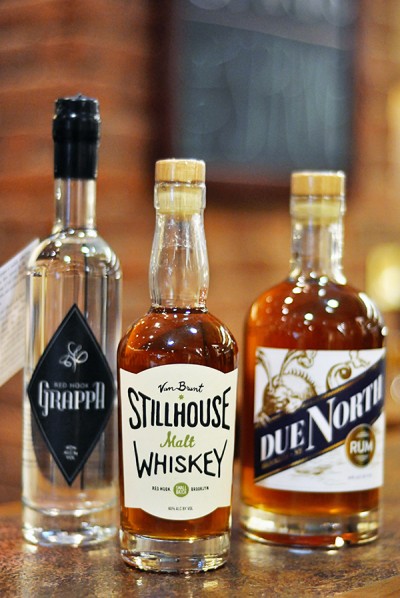 Begun in January 2012, Van Brunt Stillhouse, located in Red Hook, Brooklyn, is an up-and-coming distillery to keep your eye on. Like many of their neighbors in New York, the folks  at Van Brunt are focusing on making artisanal spirits from scratch. From the outset, Daric Schlesselman has employed a strategy that produces spirits with historical resonance, craft ingenuity that can only be found in things being made at this small a scale, and an insistence on the highest quality raw materials, preferably local if possible without being unnecessarily dogmatic about it. The three spirits currently available from them, rum, grappa, and whiskey, all touch on these elements.

Close to a year ago they released their first product, Due North Rum. Immediately this caught our attention. This was a significant deviation from the new generation of vodkas, moonshines, and gins being produced at nearly every new distillery across the country. And more importantly, it reminded us of the significance of rum in colonial New York through the American Revolution. Rum was THE original spirit of America, easily the most widely consumed and closely tied to the British sugar trade in the Caribbean where molasses, a byproduct of making sugar, was shipped to colonies like New York for rum production. Taxation without representation really hit home with the Molasses Act of 1733 and the Sugar Act of 1764, and the stage for revolution in the colonies was set. Instead of using industrial molasses from the Caribbean, Daric has found a unique source of organic family-grown unprocessed sugar from the Himalayas. The fresh, inviting character of the sugar and the rich wood profile of the small barrels transform each other into a rum with delicate sweet and floral qualities with a luscious caramel texture and mildly spicy finish.

Yelling “grappa” in a crowded room won’t exactly make everyone’s eyes light up. There are many extraordinary examples produced by master distillers, but sadly, most people only remember the rough, harsh, bootleg examples that their grandparents used to swear by, and they’ve never had the guts to give it another chance. And I’ll admit: grappa from New York just sounds sketchy. But great grappa is well worth drinking, and Van Brunt’s Red Hook Grappa, made from Lieb Cellars Pinot Blanc grapes, is great. Where bad grappa is harsh, funky, and unbalanced, this is delicate, floral, slightly sweet, and mouth-watering with hints of gentle vanilla. An impressive labor of love.

Though rum may be on the rise again, there is no denying that whiskey is America’s spirit of the moment. With new ones popping up all the time, there still somehow doesn’t seem to be enough to go around. Keeping with the experimental, “anything’s possible” attitude fundamental to craft distillers, this is a distinctively new American whiskey. Made entirely from malted barley and aged in small oak casks for under a year, the Malthouse is playful and approachable with a surprising amount of complexity for a whiskey this young. Perhaps the most impressive effort yet from this budding distillery. We can’t wait for the return of their American whiskey, and the arrival of their first-ever rye.