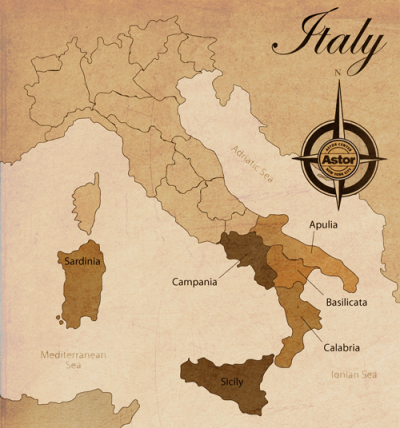 Southern Italy is home to some of the country’s best-kept wine secrets. As the rest of the world catches on, the quality of these already delicious wines is only going up, and the bottles exported to the US these days are truly world class.

Scroll down for a rundown of Southern Italy’s most important regions and grapes, or check out our full selection!

The “heel” of Italy is almost completely covered in vineyards and wine denominations. It’s uniformly warm, flat, and fertile: perfect grape-growing conditions. Much of the region is dominated by Sangiovese, Montepulciano, and Trebbiano. These grapes are right at home in Apulia, which produces some of Southern Italy’s greatest wine values. Primitivo, Negroamaro, and Malvasia Nera are able to stand up to the heat in the southernmost part of Apulia, producing wines with higher levels of alcohol and enough structure and fruit to pull it off.

Just to the west of Apulia, Basilicata (the “arch” of the boot) is the home of one of Italy’s greatest grape varieties, and one of its least well-known: Aglianico. Wines produced on the slopes of the extinct volcano Monte Vulture are a rare and special treat. The cooler climate here softens the powerful and dense Aglianico juice, giving it just the right amount of acidity, while the volcanic soil imparts a deeply mineral streak and a wealth of black spice notes. The result is a riper, more approachable expression of Aglianico, and a great introduction to this incredible grape. We highly recommend D’Angelo’s stunning “Vigna Caselle” Riserva Aglianico.

If you’re already in love with Aglianico, look here for some big, no-holds-barred expressions of this noble grape. Campanian Aglianico can be a real linebacker of a wine: dense, powerful, and intense on the palate. Try the dark and rustic Aglianico Campole, Alois to see what we mean. Notable Campanian whites include the lovely pear- and balsam-scented Falanghina, which has recently enjoyed a well-deserved resurgence in popularity.

Calabria (the “toe” of the boot) has a wine culture dominated by small producers, most of whom specialize in full-bodied reds. Our favorites are made from the red Gaglioppo grape: these big, robust, assertive wines shine alongside hearty dishes.

This volcanic island is one of the most prolific wine-producing regions in Italy, and it has one of the longest winemaking histories as well. While perhaps most famous for its Marsala and dessert wines, Sicily produces a wealth of fantastic dry wines as well – and here, just as on the mainland, they’re only getting better. Many Sicilian winemakers are focusing on indigenous varieties like the white Grillo and the red Nero d’Avola, the latter having exploded in popularity over the last few years. Wines made from Grillo are robust and citrusy, while Nero d’Avola produces powerful, structured wines with deep flavors of dark cherry and black spices. Nero d’Avola is often blended with Frappato, a somewhat less intense Sicilian variety, to produce wines like those from the famed Cerasuolo di Vittoria. Wines with this much power, counterbalanced by such refined finesse, really should not be missed.

Somewhat oddly, the island of Sardinia produces much of its wine from Spanish grape varieties. The Sardinian climate has proven to be perfect for classic Spanish red grapes like Cannonau (also known as Garnacha or Grenache) and Carignano (called Cariñena in Spain, and Carignan elsewhere in the world). As far as white wines go, we’re particularly fond of easy-drinking Sardinian Vermentino. These wines are light, citrusy, and refreshing, with delicately herbaceous aromas.