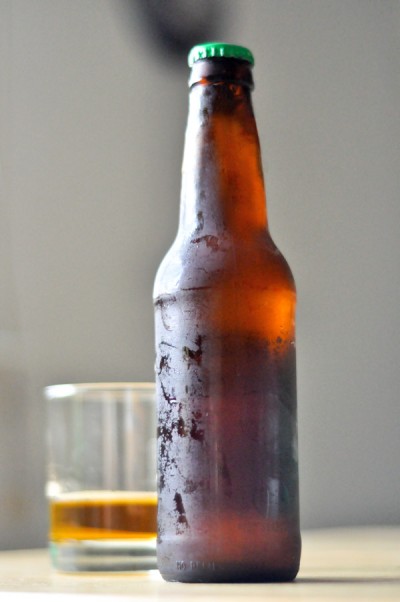 The Celtic people of Ireland and Scotland have been distilling beer into whisky for centuries, but the quality of the beer used for distillation is very different from the beer we drink in a pub. The sole purpose of wash (known as “distiller’s beer” in the US) is to be made into whisky. Nobody in his or her right mind would drink it. So wouldn’t it make sense that, if we created a higher-quality wash, this would translate to higher-quality whisky? Well, not necessarily, but let’s just say the flavors would be diversified if craft beers were distilled. Right now, the limiting factor for many countries, particularly those in the EU, is the legal definition of whisky. Because no flavorings are permitted during the production of whisky, craft beer cannot be used, because hops would be considered a flavoring agent. This is not the case everywhere, though. Bierbrand from southern Germany is a distilled spirit created from craft beer. The most prominent example in the US market is Uerige Stickum. By legal definition, Bierbrand is produced from fresh craft beers for the sole purpose of carrying on the characteristics of the beer from which it is made. The process of distilling craft beer is also alive and well in the United States. Anchor Steam in San Francisco started distilling their beers back in 1993. Many distilleries, such as Charbay and New Holland, started to follow suit. Now, distilling American craft beer dominates the chatter in the whisky industry.

If distilleries start using craft beer instead of wash, what does this mean for the whisky? Well, let’s look at the production of both and see how they differ.

The major difference is the addition of hops into the whisky-making process. Hops contain flavor and aroma compounds not found in whisky wash. The addition of hops occurs during the wort boiling stage, a process not carried out in whisky distilleries. Wort boiling makes what is known in the brewing industry as clear wort. By boiling the wort, the following things can be achieved:

1) Unwanted chemical compounds are released.
2) The remaining enzymes from mashing are denatured to retain residual sugars for fermentation.
3) Induces Maillard reactions, which are chemical reactions between amino acids and sugars that create color and flavor in the beer.
4) Coagulates proteins in what is known as a “hot break” to prevent haze precursors.
5) Most importantly, boiling sterilizes the wort – but for whisky, the act of distillation is sterilization enough.

While wort boiling is an interesting step to be explored during whisky production, nearly all distilleries see it as nonessential. It incurs higher costs and adds at least an hour to a production cycle, which could be a serious problem if the distillery is running at full capacity. In addition, the yeast for distilling whisky is very different. The major criteria for good distiller’s yeast are high ethanol yield, high tolerance, and good extract. Distiller’s yeast is not repitched (reused) and it is left suspended in the wash. For craft beer, the use of various yeast strains, both liquid and dry, are major contributors to flavor development. The yeast is cropped and reused numerous times. Fermentations of wash are usually carried out at higher temperatures, whereas craft beer fermentations are done at low to medium temperatures. Post-fermentation, craft beer brewers have the important responsibility of maintaining microbial stability, while distillers allow infections to ensue on purpose. At low levels, the formation of lactic acid bacteria on wash has been scientifically proven to form important flavor congeners in whisky. While it isn’t essential to allow for lactic acid formation, many whisky distilleries see it as important to the final product.

Does that make for better whisky? Taking us back to where we started: not necessarily better, but most certainly different. The exploration of how different processes during beer/wash production can affect whisky character is something that is gaining serious interest, and we can only expect to see more innovative whiskies distilled from craft beer. It is a very exciting time to be a whisky drinker!

Uerige “Stickum Plus” Cognac Barrels
Made from the fantastic brewery, Uerige, this Altbier (German style brown ale) is distilled and then aged in Cognac barrels. The tasting profile is hoppy, bright with a Sauternes wine nose and Asian pear finish. Please don’t adulterate this with anything but a hunk of cheese on the side. Simply stunning.

Uerige Stickum Plus Spatburgunder Barrel
This Altbier (German style brown ale) produced by the brewery, Uerige, is distilled and then aged in a Spätburgunder (aka Pinot Noir) barrel. The result is a complex array of autumn spices, dill, red fruit and even a touch of chocolate.

Charbay “S” Hop Flavored Whiskey
Distilled from stout beer made at Bear Republic Brewery and aged in French oak casks, this new innovative bottling from Charbay represents the possibilities of making whiskey from high-quality beer. Roasted chocolate and coffee notes are refined by the oak maturation. This is whiskey of the highest quality.

New Holland Brewers Whiskey
In their short history, New Holland Spirits is already establishing themselves as a force to be reckoned with. This brewers whiskey, derived from what would typically be used for delicious finished beer ends up being distilled twice in a traditional pot still. The combination of malted barley, smoked barley, and rye as well as aging in heavy charred small oak help add layers and layers of flavor complexity and subtle nuances of aroma. Cereal aromas and flavors mix with a caramel sweetness all guided along by a streak of spiciness and a hint of smoke. Welcome to the New World of Whiskey friends.