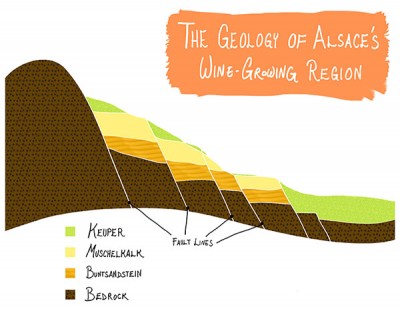 Did you know that Alsace has the most diverse geology of any wine region on earth? As I mentioned in my last piece, the major vineyards of Alsace are situated near the edge of the Rhine Rift Valley, where the earth’s crust is pulled apart across two parallel fault lines, causing the section of crust between the faults to collapse. The same geological activity has exhumed layers of ancient rock that now form the basis for a tremendous patchwork of soils, giving rise to an array of some of the most expressive wines made.

Unlike Burgundy or Champagne, entire regions where the soils consist of a mix of marl, limestone, and sand, Alsace is home to a mosaic of soils of differing origins, owing to the geologic action which exposes varying layers, or strata, of primary rock. While a named vineyard (be it a lieux-dit or one of the 51 Grands Crus) is typically homogeneous in soil composition, with Frankstein, for example, consisting of decomposed granite, and Rangen of volcanic soils, they are broadly classified stratigraphically into three main categories, though each stratum itself is of varying composition:

If this all seems a little abstract and hard to visualize, consider the following analogy. Imagine a layer cake with three layers, but with each layer being a marble cake: i.e., it is baked from multiple flavors of batter. The top layer is mint and dark chocolate swirled together, the middle layer strawberry, apricot, and blueberry, and the bottom layer amaretto and white chocolate. There are many different flavors going on, some of them talking at cross-purposes. While it’s a perfectly pleasant dessert, there’s no real unity of concept. Cutting a slice of this cake and laying it on a plate disrupts its structure in a similar way to the fault action along the Rhine fault, exposing the various layers of cake, with their dazzling array of colors and flavors, to our eyes and palates. Tasting, for example, a generic Alsace AOC wine is like eating a big bite of cake that includes parts of all the layers, or several morsels from different parts of the cake. There’s really no way to isolate one single flavor and analyze it with any precision.

Why get hung up on fault lines, soil composition, and stratigraphy? Because it helps explain the varied nature of these wines and gives them their specificity. Returning to our cake analogy, a single-vineyard wine could be compared to a bite from, say, the amaretto and white chocolate layer; while distinct, the two flavors have a synergy that renders the overall effect more distinctive and memorable than an arbitrary combination of cake flavors.

Alsace’s most distinctive vineyards, the Grands Crus, were delineated with the understanding that each displays a certain geologic unity. The soils (as well as other factors, including exposure and microclimate) were considered so distinctive that each site molds the vines growing in its soil in its own prototype, so while the chalky marl of Goldert might favor pungent Gewurztraminer and the granite of Brand is known for zesty Rieslings of expansive mineral structure and sublime transparency, each site has a character that transcends varietal identity. Experiencing a Grand Cru wine is like getting one of those rare bites of cake that is all one flavor. For example, tasting the amaretto cake in isolation allows us to appreciate its nuances in a way that we couldn’t in its (however beautiful and harmonious) combination with the white chocolate. The greater the geological and climatic unity of a place, the greater the precision with which a wine can express the place’s unique character.

Wine lovers are not inherently motivated to learn the nitty-gritty details of geology or climate or vine training systems (frankly, the average urban wine professional’s interest in the nature of wine as an agricultural product consists chiefly in romanticizing it), but understanding these things is precisely what gives us the context we need to discuss wine intelligently, and a basis for a deeper appreciation of the magic of how light, water, and rock come together to make these fantastic creations. Much is made of the desire for a precise definition of the concept of terroir, but I think we can all embrace the broad view that the most interesting and important thing about a wine is that it is from somewhere.