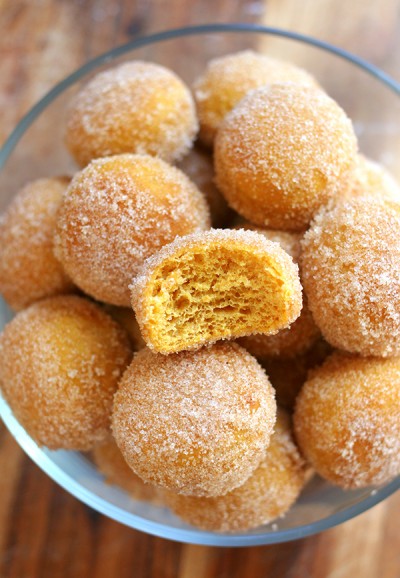 Well, hello there, spring! I adore this time of year. Although the temperatures are often still firmly in winter territory, somehow the sun’s rays feel warmer than they did a month ago. The longer days don’t hurt, either. They have me craving radishes, dill, and baby lettuces that won’t be here for weeks. Don’t even get me started on how long I have before local asparagus hits the markets. But still, it’s spring.

Although today’s recipe can easily be made year-round, in my mind it is particularly suited for spring. After all, carrots are the vegetable mascot of the season, and the cool mornings are perfect for splurging on hot donuts dipped in melted butter. Oh, did you think because they were baked that they were going to be healthy? Alas, these donuts are virtuous in flavor rather than nutrition, although I’m sure having a little carrot in your baked goods never hurt anything. (In fact, it looks like March is the month I like to put vegetables where they aren’t commonly found: Exhibit A – parsley pasta; Exhibit B – beet pasta.)

How are you celebrating the season through food?

Directions:
1. In a small saucepan, melt the butter over medium heat. Pour into a small bowl and set aside to cool. Add the milk to the saucepan and heat until warm to the touch but not so hot that you can’t hold your finger in it comfortably.

2. Pour the milk into a large bowl and stir in the yeast. Let stand for 10 minutes. Stir in the sugars, salt, vanilla, ginger, cinnamon, and nutmeg. Add the carrot puree and eggs and stir until combined.

3. Add 3 1/2 cups of bread flour and stir until combined, then continue to add flour, 1/4 cup at a time, until the dough holds together but is still pretty tacky. Knead the dough on a heavily floured surface until the dough is smooth and elastic, about 10 minutes. Place the dough in a large, lightly buttered bowl, cover, and let rise for an hour.

5. Preheat the oven to 400 degrees. Meanwhile, prepare the topping by melting the 4 Tbsp. butter in a small saucepan and mixing the sugar and spices in a medium bowl.

6. Bake until just turning golden, about 15 minutes for the donuts and 10 minutes for the holes. Allow to cool enough to handle before adding them, in batches, to a medium bowl to drizzle and toss in the melted butter then roll in the sugar/spice mixture. Serve warm or at room temperature. They are best on the first day but are still great on Day 2.

Ze Bulle Rosé, Zéro Pointé – NV
The cherry and raspberry mingle with the cinnamon and ginger and bubbles are always delicious with fried food!