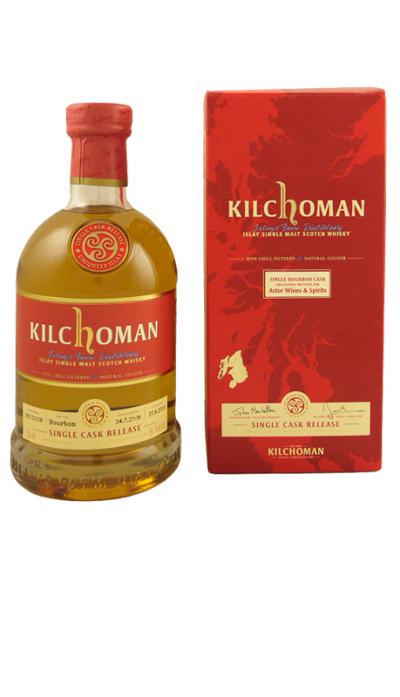 Kilchoman is the first distillery to be built on Islay in 124 years, and because the region is world-renowned for its whisky, all eyes were on Kilchoman from their inception in 2005. We remember counting the days before the whisky hit three-years-old and could legally be released. When you think about it, that’s an odd thing for Scotch drinkers to do. Sadly, I meet many consumers who still believe in “the older the better” mentality, which is why I have really enjoyed watching brands lose the age statement on labels. It takes that pre-conceived notion out of the mix. We know for a fact that Kilchoman’s whisky is young, obviously, because they only started producing a few years ago, but also because they are honest. Other big brands, who have also abandoned age statements, will never tell you just how young some of the whisky in that bottle is. That’s too bad, because the concept of batch releases and works-in-progress allow the consumer to follow the maturation of new-make spirits that typically remain exactly the same each run. Yes, of course, to a large degree new distilleries want to release their whisky as soon as possible without statements like “three-years-old” to generate revenue, but it’s fun to watch the whisky evolve.

Kilchoman represents what distilleries used to look like before Scotch whisky went global and more than 200 markets demanded Scotland’s national drink. Distilleries turned into factories of whisky by significantly increasing output and automating their production cycles. That isn’t a dig at big distilleries; I still find great appeal in large-scale operations for their energy efficiency and ability to manage consistency. That said, Kilchoman is a historical site for whisky production, and there is a great deal of charm in that. They have two pot stills managed by a person with a pen and notebook, not by a computer. A proportion of the barley is grown on the farm the distillery sits on. Maltings for their 100% Islay expression is done in the traditional floor method. Bottled by hand and packed for shipping on site, Kilchoman’s production methods epitomize what it means to produce whisky from grain to glass.

Here’s what we have to say about our new single cask from a distillery that we all love:

Kilchoman Bourbon Cask Matured Scotch – 2008
If you like smoky Scotches, you should drink them at a young age. The phenolic compounds that are responsible for the smoky characteristics break down over time, making this exclusive five-year-old expression is in its prime. Using malt that is peated at 50ppm and aged in an ex-bourbon cask, the aromas in this Scotch are intensely floral. Initial notes of rose petal, pine, and lavender yield themselves to a number of smoke and spice components that are released with the addition of water. Wood char, saw dust, nutmeg, and campfire smoke are just some of the many notes that can be traced. On the palate, there is a pine needle tingle that is reminiscent of a good gin. The finish is assertive, with a hit of smoke to remind the drinker that he/she is consuming a peated Islay whisky.

Check out the full Kilchoman line of spirits available at Astor.