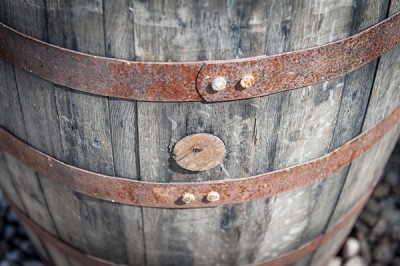 Cask strength is a seemingly straightforward concept: a spirit is distilled one to four times—depending on the distiller’s preference—and is then transferred to a barrel or cask for aging, which produces a spirit with a higher alcohol content and greater concentration of flavors (due to the higher ratio of contact with the barrel). Once the master distiller decides the product has reached the desired maturity, the aged spirit is bottled. (Non-cask strength bottlings would be diluted with water, typically to 80 proof, and then bottled.) The resulting proof of the bottlings varies by region. This is due, for the most part, to three main factors: the type of still used the amount of times the spirit was distilled, and the humidity of the region.

Stills
The majority of spirits are distilled using either pot stills—for whiskey—or column stills—for neutral spirits (vodka, gin, etc.). These are generalizations, of course, and there are many fantastic examples of pot-distilled gins and column-distilled whiskies that differ from traditional styles. The main differences between the two processes are efficiency and residual flavor. The use of a column still results in a higher proof and more neutral flavors, while pot stills exhibit more flavors from the original mash and retain more water.

Amount of Distillations
The more times a spirit is distilled, the more neutral the resulting spirit becomes. Each region has its own legal minimum, which can be briefly summarized as follows: bourbon once, Scotch twice, Irish whiskey three times, tequila twice, Cognac twice, and Armagnac once. Producers have the option to do more than the minimum, if they so choose.

Humidity
Humidity plays a major role in aged spirits. Regions with high levels of humidity, such as Scotland and the Caribbean, have higher losses of ethanol over water, and these losses lead to the spirit losing proof over the course of aging. Drier climates, like those in North America, lead to higher losses of water, which raise the proof of the spirit over time.

Using this information, you can potentially deduce, based on a distiller’s region and the proof of the spirit, how a particular bottling resulted in that proof. Whiskies are traditionally distilled in pot stills, while vodkas, gins, and other neutral spirits are typically distilled in column stills. Regions have their legal minimums regarding how many times they must be distilled, a contributor to their final flavor and texture. Finally, a region’s humidity impacts how much alcohol a spirit may have after aging, as more water or alcohol may evaporate during the aging process, depending on climate. There are many exceptions to these rules, of course, which can yield drastically different results; this is meant only as a guide, relating to typical spirits that are distilled in the traditional manner.

Try Plantation Barbados 20th Anniversary Rum
The quality of this Rum is way way beyond it’s price tag. Heavenly slightly waxy creams give way to coconut and vanilla aromatics. Yet the nose still has room for a fresh cane element. Soft rich mango fruit hints of barrel spice and a beautiful dry finish.

Try Navazos Palazzi Cask Strength Rum
The color is deep, resembling cola and heavy Sherry. Initial notes are dry and intense, with rich, seasoned oak and smoke. Every few moments, new notes appear, one at a time, ranging from dried grapes, to worn leather, to buckwheat honey, to molasses, to roasted chestnuts. The palate is full of flavors of sun-drenched raisins and intense spices. Bitter and sweet notes vie for attention, while the spirit unfolds in an unbridled, roaring manner. One of a kind.