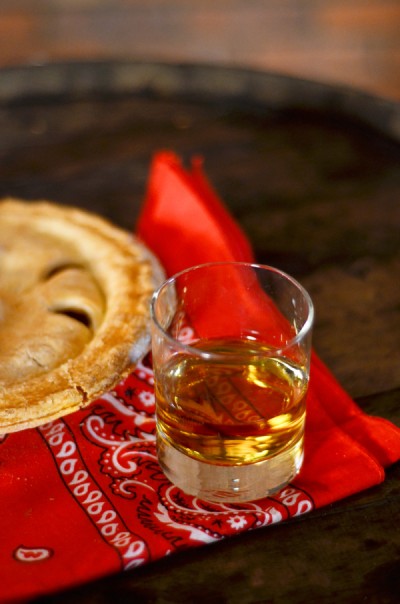 Let us get you in the spirit of the Fourth of July with some of our best and brightest spirit staff picks (see what we did there?). These sippers are sure to bring fireworks to even the tamest of Independence Day barbecues, so fire up the grill and follow our lead in honor of the red, white, and distilled.

Mellow Corn Straight Corn Whiskey
This oddball from Heaven Hill is the only straight corn whiskey still in production at a major distillery. Corn whiskey is quite unlike the other American categories as its mashbill requirement is 80% of the starring grain (rather than 51%, in the case of bourbon, rye, wheat, malt, and rye malt whiskies), and it doesn’t have to see wood at all, hence the various clear “moonshines” out there, some of which are grain-neutral spirits and not whiskey at all, caveat emptor. Furthermore, if aged, it must be in un-charred barrels, new or used. This being not only straight but also bottled-in-bond, you’re looking at four years of aging, which has given the juice more than enough time to lose its white-dog qualities and become truly enjoyable. This one is not for Pappy-chasers, but those desirous of mastering the full spectrum of American whiskey. – Max W.

Barr Hill Gin
One thing that I have learned from the great chefs of the world is that refinement is often an exercise in simplification, an act of stripping something down to its most essential elements and letting those notes resound in their full glory. Sweet, floral, and slightly herbaceous, this is one of the most fascinating and delicious gins I have had the privileges of drinking. Comprised of only two “botanicals” (juniper and honey), its beauty is in its simplicity. Todd Hardie (who makes this gin) is a beekeeper based in Vermont. He produces some of the finest honey you’ll find anywhere. Todd travels with his bees up and down the eastern United States seeking new areas to pollinate, maintaining the health of his colonies. While his honey does not display “terroir,” it does posses a complexity that stems from the biodiversity of his bees’ fodder.  -Omari W.

St. George Raspberry Brandy
This amazing eau de vie from the Californian distillery St.George Spirits captures the essence of perfectly ripe raspberries at their true peak. The nose is amazing. It just takes me back to afternoons picking wild fruit with my grandparents. I can smell fresh running juice, along with the entire bush and the leaves and stems that gave the fruit its life. The palate: beautiful raspberry all the way, with a hint of stone fruit and a charming rusticity that envelopes nature itself. This is a stunning distillate that you cannot fail to enjoy. Cheers. – Stephen W.

American Fruits Bourbon Barrel Aged Apple Liqueur
Going a decade strong now, the distilling branch of the historic Warwick Valley Winery is a gem nestled in the beautiful and equally historic Hudson River Valley. After acquiring a steam-fired German copper pot still in 2001, they became the first licensed distillery in the Hudson Valley since Prohibition. All of the apples are sourced exclusively from their own 10 acres of plush apple orchards. After fermenting the crushed apples in stainless steel tanks, the cider is distilled quickly and transferred into small bourbon casks made entirely from New York oak trees and aged up to a year. A beautiful perfume of fresh apples mingles with vanilla and toasted almond. The palate is very clean and filled with apples with some rich caramel notes from the bourbon barrels. Truly artisanal and well balanced, this is a must-have year-round bottle. – Nima A.