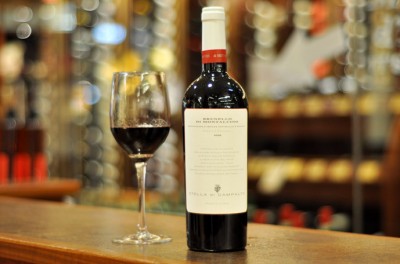 The wine business is, of course, a business. Most of us got into this profession because we were aesthetically-minded individuals, and it’s sometimes easy to forget the extent to which commercial considerations enter into what is in the bottle. This will be the first of what I hope will be a series of short notes on current (and ongoing) issues in the international wine trade and how they affect what we drink.

Today I’d like to say a bit about what are called “Super Tuscans”. A comprehensive definition of this term is beyond the scope of this article, but in general we’re talking about wines made from (or at least substantially including) international (read: Bordeaux) grape varieties in a style resembling the more modern estates in Bordeaux and/or California. I get a lot of inquiries about our selection of these, and we do carry some current vintages of the Cabernet-based Sassicaia, Sangiovese-based Tignanello, and Merlot-based Masseto. It’s difficult to approach the subject this way in the context of a commercial transaction, but to be frank, I have about as much interest in Tuscan Cabernet Sauvignon as I have in Austrian Tempranillo or Lebanese Ribolla Gialla.

It is no help that Italy’s DOC(G) system, while well-intentioned and, on the whole, a force for good, is subject to all manner of unfortunate perversions. When, for example, the Chianti DOCG regulations were rewritten to include some wines that took a more conservative, Sangiovese-based approach, enshrined in law was the addition of up to 20% international varieties, including up to 15% Cabernet Sauvignon. This means that a DOCG wine, a category intended to be the purest expression of the character of a place and the traditional style of its wines, can now be composed of one-fifth foreign, atypical grape varieties. It’s true that Bordeaux varieties seem to take well to the Tuscan vineyard, easily yielding a balanced ripeness that is difficult to obtain in their homeland (or, for that matter, in California). Valuing it for solely this reason is denigrating in the sense that it reduces the wines to a commodity and the terroir to a mere vehicle for a substance made to a “collectible” international standard. The Cabernet Sauvignon grape has a marvelous and unparalleled ability to make everything to which it is added taste like itself, probably a big part of the reason for its prominence internationally: it provides a universal benchmark by which wines can be evaluated.

I always endeavor to meet a wine on its own terms, with the assumption that its typicity is inherently valuable: an end unto itself, rather than a means. Drink something from Castelnuovo Berardegna, from Margaux, from Rutherford, not because you want to get the most out of this or that ubiquitous grape variety, but because you want to experience a traditional specialty of the region: something made there and nowhere else. This is part of the reason that, when asked about wine pairings, my first intuition is to think regionally. A style of wine not only represents the terroir of that place, but says something about it and the way they use it. It grew up there, in the hands of the people who live there. That’s tradition; an education, not a rigid, inflexible set of rules. Terroir is important, but great wines have merit that goes beyond soil composition and exposure to a general typicity of place. It’s no accident that Stella di Campalto Brunello seems to work magically with your Bistecca alla Fiorentina; it was made to.