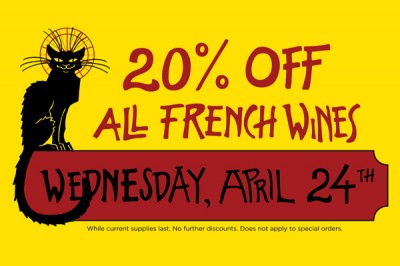 Head straight to the sale, or check out some of our favorites:

In many ways French culture sets the tone for many of the everyday pleasures we enjoy across the world. With their literature, poetry, art, fashion, food, and drinks, the French have always found a way to make life more invigorating and enjoyable. One of the easiest ways to find out what we mean is by picking up a bottle of French spirits.

Vodka
Many of France’s vodkas are distinguished by the use of superior-quality whole wheat, grown in the West and South West areas, known as the breadbasket of France. (It’s also the reason they have such amazing bread!) The classic example would of course be Grey Goose. Newer additions to the category have very successfully taken advantage of another key French product: grapes. Ciroc has won over a broad spectrum of drinkers with their accessible Snap Frost benchmark vodka as well as their celebrated flavored range.

Gin
When you think gin, you may naturally think of England, James Bond and the classic London Dry style, or any one of the groundbreaking New American gins being produced at craft distilleries around the US, but value and quality with a twist of ingenuity are a winning combination of characteristics that select French gin producers employ with stunning effect. Citadelle Gin may be, dollar for dollar, the best value on the shelf and the most complex. Made with high-quality whole wheat, some of which is grown on the estate premises, Citadelle is the only gin in the world distilled from a direct-fire distillation in traditional Cognac copper Alambic Stills. The result is a gin with a supple texture and a classic juniper-based profile. It is incredibly versatile and a must-have for everyone’s bar. Other producers like G’Vine again use the prized grape as their base for their gins, which range from classic and dry for the Nouaison to fresh and floral for the appropriately named Floraison. I particularly love the Floraison as my go-to for one of the best cocktails in the world, The Corpse Reviver #2.

Cognac
Speaking of grape-based spirits, there is perhaps none as famous as Cognac. The spirit is made exclusively in the Charente District of the country, about three hours southwest of Paris. Cognac is a port town not much more than 30 minutes away from the West Coast of France and the Atlantic Ocean. For this reason, trade in the region has always been robust, and as a result Cognac gained international fame, aided greatly from the beginning and still to this day by the great sea powers of the time, the Dutch and the English. However, with its focus on terroirs and ultimate refinement, Cognac will always remain distinctively French. Made by twice distilling grapes grown in the region on a variety of soils in copper alembic stills powered by direct flames, Cognac has liveliness, depth, and diversity that few other aged spirits can match. To experience the unparalleled joy of authentic Cognac, look no further than examples such as: Pierre Ferrand Ambre, Maison Surrene unblended Borderies, Navarre Vieille Reserve, and Guillon Painturaud VSOP, amongst others.

Armagnac
Nestled in the woodsy and lush Ars District in Southern France known as Gascony is the home of a 700-hundred-year-old brandy known as Armagnac (nearly 250 years older than Cognac), but despite being there first, Armagnac has remained a treasured secret the French have kept mostly to themselves. Differing from Cognac significantly in distillation method and amount produced, Armagnac is made with a small column still and typically only one distillation, to make eau de vie that will be put away into barrels. There are over 300 independent small family producers in the region, as well as older merchant houses and producers like Laubade and Castarede with staggering libraries of vintages that could keep you occupied for a lifetime. Way too often relegated to the anniversary-gift indulgence, Armagnac is ripe for exploration: from incredibly satisfying everyday brandies like Marie Duffau Napoleon and Laubade VSOP to unforgettable bottlings such as Delord 25 Year, Esperance 1991, and Darroze 1962, just to scratch the surface.

Rum
The French love of regulation, combined with the striving to be different and individual, has perhaps never seen a more perfect incarnation than with French rums. Known as Rhum Agricole or, as the French prefer, Rhum Originale, rums made in the Departments of either Martinique or Guadeloupe are made only with fresh-pressed cane juice created right after the stalks are harvested. As a result, these rums are loaded with the qualities of their terroirs and are unlike any other rums in the world. The adjectives abound when describing aged agricoles, from the vegetal, funky, sharp Duquesne expressions, to the supple, nutty, gorgeous, citrus- and fruit-driven Neisson expressions, all the way through the elegant, luxurious, regal Rhums of Clément and J.M. For a prismatic, mind-bending experience full of grassy, mineral freshness, try any one of the unaged bottlings.

Vermouth/Aperitif/Liqueur
Perhaps no categories of French beverages are as diverse, or as accessible and beloved, as their aperitifs and liqueurs. Many of these wonderful potions are made of ancient concoctions whose original recipes, along with the savoir-faire required to make them, are closely guarded secrets passed down through the generations to a select few while remaining a mystery to the uninitiated. To make up for the impenetrable nature of many of these wonderful rarities, the majority of them are incredibly easy to drink and extraordinarily versatile and mixable. From the classic elegant vermouths of Dolin, to the alchemic Chartreuse (it’s so good they named a color after it) full of intense alpine herbs, to the quaffable and mixable aperitifs such as Lillet and Suze, all the way to the expert liqueurs of Combier and the rare, precious offerings from Laurent Cazottes and beyond, there is something for everybody and every occasion here.

Whisky
Despite the French knack for distillation and their clear love of whisky, there is surprisingly very little history of whisky being produced in the country. Much of that may be changing and the future may be bright, and with some new examples showing up recently we will continue to be on the lookout for distinguished examples of French whisky. If you are looking now, however, there is some great stuff to be had, and a particular exception would certainly be Armorik. Produced at the Warenghem with over a 100-year history in distilling, Armorik is made in Brittany where the climate is so very much akin to that of Scotland that it is no surprise that this is where the first-ever French double-distilled whisky was made in the style of Scotch. For the whisky drinker who thinks they’ve had it all, or for the curious, this is a must-try single malt.