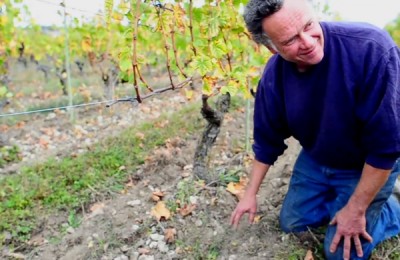 The unrelenting pursuit of terroir – not only that wine should say distinctly where it comes from, but what the year was like. Philippe Gourdon of La Tour Grise, a fervent proponent of Biodynamics in viticulture and hands-off traditional vinification, has garnered the ire of France’s INAO (the governing body that oversees the French appellation controlée system) and the respect of like-minded producers of multiple generations within Nicolas Joly’s Renaissance des Appellations. Recently, Philippe chose not to submit his wines for Saumur appellation, and therefore has lost the right to place “Saumur Blanc” on his labels, a rule that also means he may not place “La Tour Grise” on the labels either. A pity, as the rustic 15th-century chateau in Le Puy-Notre-Dame is where he and his wife, Françoise, call home. I have a feeling this kerfuffle with the bureaucrats has more to do with a personality clash than anything else. Frankly, I’d take any of Philippe’s wines over the mass-produced, over-sulfured, innocuous swill coming out of Anjou’s large corporate wine companies. And yet, his wines have been called “atypical.” Philippe Gourdon is an old-guard original of Loire region Bio; the Gourdons acquired their vineyards in 1990, and from the beginning, placed them in conversion towards “la biodynamie.” Currently, their 15 hectares of Cabernet Franc and 5 hectares of Chenin Blanc are certified Ecocert (EU organic) and biodynamique by BIODYVIN since 1998. These are Loire wines that define terroir. They tell you where they come from and what kind of year they had.

We all have sentiments for firsts. Monsieur Gourdon is the producer who was able to demonstrate terroir to me. Not in the “Oh, this wine tastes like rocks and this one is like lemons” way, or “This wine comes from a cool area and this one from a warm,” but viscerally, so it was caught with all the senses. I visited La Tour the first time in 2009 after meeting Françoise in New York. My first impression of Philippe was that he was gruff, abrupt, perhaps too busy to have his time wasted by some student. In his yellow slicker on a summer day with intermittent heavy rain, he drove with me to the crest above Le Puy, and I saw really for the first time that chaos of biodiversity in a parcel or vines. It was a moving field, vibrating with so much life. The cellar or chai of La Tour Grise boasts no fancy equipment. Philippe understands what his grapes need in the same manner one understands the personalities of one’s children. For example, the Chenin from his parcel of hard, Jurassic limestone, with rough stony topsoils from the higher elevation, becomes Les Fontenelles. This Chenin has a proper posture, is stern and upright. This wine rests on its lees a small period of time, has no contact with wood. Les Amandiers, on the other hand, comes from softer soils, the Turonian limestone or tuffeau, which appears in Puy in greater concentrations than in the rest of Saumur. It requires some room to smooth, requires a frame to become more supple.

His are characterful wines. They bring great pleasure in their diversity, their personalities; the way they transport you somewhere else. For me, I am reminded of the fascinating Angevin and Saumurois culture in the Loire: the generous meals with kind people in which you can drink and drink without feeling overblown with wines that are too heavy, too tannic, too much. I am reminded of the smell of damp stone walls, the universally relaxed manner one is served quite elevated cuisine, a sense both aristocratic and common at once. And so, these are my rainy-day wines. I am thankful they exist.

Oh yeah… 2002 and just recently disgorged. This sparkling Chenin astounds with its complexity. In a room of 10 people you will have 10 different opinions and a range of adjectives from dried flowers to tea to smoke and minerals to honey to fruit and so on. I love this wine for brunch, with lunchtime omelettes, for toasting at celebrations; it is challenging for many palates, but not intimidating. Try it on day two for even more sensory happiness.

This wine is austere, square, stern; it requires time to get to know and relax. I recommend decanting, as it is not afraid of air. This Chenin comes from hard limestone soils, rested on its lees before bottling. It is all apple skins, gold and green apple flesh, river-stone acidity. It is meant for meditation, and pairs excellently with fish and young cheeses. Some bottles have a few tartaric crystals; these are harmless and merely evidence of the fact that this wine was not cold-stabilized.

I wanted to call this a rosé when I first saw this charming Pineau d’Aunis. I was corrected; this is a pale red. Youthful, fun, blood-orange and cherry fruited, with swaths of white stones and pink pepper adding textured layers to a lighter-style red wine. It will turn a frown upside down, especially when paired with grilled salmon, mild cheeses and snacks. Pineau d’Aunis is rarely seen in the Anjou area of the Loire Valley; it used to be widely planted, now has almost disappeared in this region. The variety does well in the chalky and tuffeau-based soils of Philippe Gourdon’s vineyards. I recommend serving this wine cool and letting it open as well.

Aged, sweet Chenin is a rare find – especially when it has this level of refinement and delicacy. Earthy caramel, golden honey laid over with impressive stony acidity that opens and evolve in the glass. This is a treat for now! And it demands a light chill and to be served alongside a mild blue cheese, sweet chevre and toasted walnuts, or enjoyed on its own for pure pleasure!