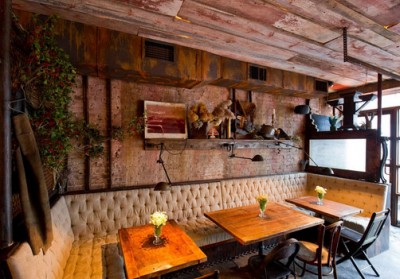 Super Bowl Sunday was coming up, and I was looking for a way to spend the evening. I’d done the whole Super Bowl party thing in the past, and it just wasn’t my cup of tea. Deciding to treat myself to a night out, I set my sights upon Edi & the Wolf, a place I’d been meaning to check out for quite some time. Having earned a Michelin star at Seäsonal on 58th Street, tag-team chefs Eduard Fraueneder and Wolfgang Ban embarked two years ago on this more accessible downtown venture, offering somewhat more casual menu in a setting of rather precious rusticity.

The Atmosphere
The decor and overall vibe of the place is inspired by Vienna’s Heuriger, or young wine bars. Vienna is one of the few major cities in the world with vineyards within its city limits, and an ancient law guarantees the right of Viennese winegrowers to open, during the appropriate season, their own wine bars, where they serve wine of the current year’s harvest, called Heurig (German for “this year’s”). It’s essentially Austria’s Beaujolais Nouveau, without the attendant commercial gimmickry. Like Beaujolais Nouveau, the wine usually isn’t very good, but the important thing is that it’s drunk in an atmosphere of relaxation and conviviality (Gemütlichkeit in German).

The Food
To what extent they succeed in replicating this atmosphere, I couldn’t say, as it was a quiet night. They were expecting a large private party later that evening, but for now the dining room was empty, except for “the Wolf”, co-proprietor Wolfgang Ban, who was seated at the bar enjoying a meal while chatting with the sous-chef. After struggling a little over the wine list (more on this later), I start with an appetizer of Liptauer & Herb Gervais. Liptauer is a traditional Central European dish of fresh cheese (and usually some quark) liberally seasoned with parika, onions, and caraway seeds. The herb gervais, a similar cheese spread seasoned with fresh herbs and pumpkinseed oil, sat opposite this on a small block of slate. All this was accompanied by a basket of bread, a crusty, wholesome white, and a rich dark rye. I decided the herb gervais went better with the rye bread and the liptauer with the white. A juicy, herbal white wine like the “Freiheit” Grüner Veltliner from Nigl would suit this nicely.

Next was the Wiener Schnitzel. I chose the veal option over the admittedly equally appealing heritage pork. Breading and pan-frying a cutlet is a relatively simple matter, but a technically correct Wiener Schnitzel is something that I’ve not been able to pull off with any regularity. The breading must be an even golden brown color and should not stick to the meat, rather forming a sort of envelope around it. The dish with which I was presented exceeded my high expectations. The Schnitzel itself was texturally perfect and delicately seasoned, and came accompanied with the traditional potato salad as well as an excellent cucumber salad and the seemingly ubiquitous lingonberry preserve. When I make dishes like this at home, I want a wine with some structure to it, but not too aromatically dense. The Bürklin Estate Riesling from Dr. Bürklin-Wolf might would have been one of my top choices, and was in fact listed, but alas, not by the glass.

Of course Austrian, and especially Viennese, cookery is particularly renowned for its desserts. While I don’t have as much of a sweet tooth as I once did, I couldn’t allow myself to depart without ordering the palatschinke, essentially a rich crepe filled with blueberries and garnished with custard sauce and a bit of fresh whipped cream. It was exactly what I wanted: flavorful and rich without being heavy or overly sweet.

The Drinks
A word about the wine list: The wines are all well-selected and clearly appropriate to the cuisine and setting, with several prominent producers represented. But when one has a focused and relatively concise wine list, inevitably, the options by the glass will be a relatively small subset of these. I found the ones I sampled thoroughly enjoyable, but a little less than memorable, and for this reason I suggest going to Edi & he Wolf with the intention of enjoying one (or more) of the delightful bottles on their list. My understanding is that Edi & the Wolf has acquired a liquor license since my visit, so now you may be able to conclude your meal with some of Austria’s delightful fruit spirits like the Blume Marillen from Distillerie Purkhart.

Edi & The Wolf is located at 102 Avenue C, just below 7th Street. Bring friends. They will supply the food, the drinks, and possibly even some Gemütlichkeit.