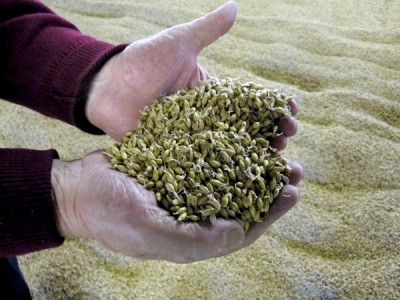 The other day I was sipping a rum that boasted of its unique terroir…limestone mountains, unique sugarcane strain, special climatic differences. It was an interesting and very unique rum, but it didn’t particularly give me a sense of place. I didn’t feel like was in Jamaica, or even gain a profound sense of limestone soils. Why didn’t the rum behave in the same way a wine may have? The questions started pouring out: What is the terroir of a spirit? Is it the soil, the elevation of the distillery, the water, or where the spirit was aged? If a spirit is unique but doesn’t give me a sense of place, is it “terroirless” or should I be redefining how I sense terroir in a spirit? Or have I simply not had enough terroir-based spirits to know?

Oh my goodness, I was quickly realizing a thesis paper could be published (and probably has been) about just the different factors that influence the flavors of a spirit. Terroir is not an easy topic to discuss; the terroir of spirits is even harder. It is very subjective: each distiller, blender, and taster has different idea of where the terroir in their spirit is derived from. Some say it is the water; others the aging process, or the origin of the raw ingredients. I am not going to write a thesis paper, but instead attempt to be a catalyst for the discussion of terroir in spirits.

To start with a bit of background: terroir is often defined as the sense or personality of a place. It is also how well one perceives said sense of place through the glass of liquid in front of them. With wine it is a bit easier to grasp the ineffable concept, since generally speaking it is the environmental factors that influence the development of the grapes on the vines: soils, weather, elevation, hours of direct sun, etc. The winemaker’s influence on the wine is commonly excluded from the notion of terroir; in theory, intervention from the maker detracts from how the terroir is expressed. For example, a heavily oaked white wine is generally not seen as a great expression of terroir. This does not, however, make a wine with more intervention inherently less terroir-driven. After all, the wines of Germany, which by most accounts are archetypical terroir-driven wines, are thoroughly manhandled through a variety of winemaking techniques. With spirits, the product is inherently more processed. In simple terms, wine can be created spontaneously, without human intervention; a spirit requires a machine and a human hand.

Still, the term “processed” invokes images of yellow food squares individually wrapped in plastic and sold under the moniker of “American cheese.” Since we often view certain interventions as taking away from the terroir in wine, we might assume that the distillation and aging process alter the sense of place of the spirit. Many will argue, though, that it is in fact that aging process that invokes the sense of place in spirits. Scotches that are aged on Islay or Orkney are characterized by their salinity, which is most often attributed to the spirit being held in warehouses permeated by salty sea air.

My first realization is that I need to stop thinking about the terroir of spirits in the same sense that I do wines. Even though they both contain alcohol, it’s like comparing apples and oranges. Spirits are very different from wine and we should think about them in a distinct way. Water source, place of aging, and soil could each be the greatest expression of the land in a given spirit. In tequila, elevation or the soil in which the agaves were grown may be the defining factor. And in a scotch that was aged for years in a warehouse by the sea, the ocean air may be sensed in the spirit. In a spirit that has a limestone spring-water source, perhaps it is the minerality of the water that reveals itself.

Mike Miyaoto of Japan’s Yamazaki distillery set out to prove that water, which generally makes up about 40%-60% of the final spirits, is what gives spirits a sense of place. Mr. Miyamoto experimented by trucking water from the source at Yamazaki to the distillery at Hakushu and vice versa. By distilling each batch in the other’s distillery he found that the “Yamazaki still tasted like Yamazaki,” he said. “It was the water, not the still. We even shipped in water from Scotland and made the whisky here in Japan – the final product tasted like Scotch, not Japanese whisky!”

Though water is apparently a large factor in producing specific attributes of a whiskey, does it really evoke a sense of place? I am yet see someone sniff a dram of whiskey from Speyside and exclaim that they feel like they are drinking a glass of water in Speyside. Though in a hypothetical world one probably could not tell if a whiskey was made with Poland Spring or Evian, they may very well be able to tell that there is a difference. The distinct qualities that are found in a whiskey with water from limestone caves versus red sandstone springs can be nosed by an astute individual. If one can sense a difference between the two, would it be the terroir if no notes of minerality are sensed?

Speaking of minerality, tequila is often a spirit that is referred to as having terroir due to varying soils and elevation between lowlands and highlands. Highlands have red clay soil that forces the roots to work harder to get water, adding minerality and rusticity to the tequila. While a lowland or valley agave grows in fertile brown soil sitting at the base of a dormant volcano, volcanic minerality and herbaceousness can be found in these tequilas.

While an estate-bottled wine is fairly common to see in a store, it is significantly less common to see an estate-produced spirit, a true land-based spirit where all of the variables are contained within the same place. For example, the main ingredient in a Scotch, barley, is often not sourced from the same place that the spirit is distilled, nor is one variety used. Bruichladdich, on Islay, sources 12 different varieties of barley, about half of which are from Islay, from about 28 different farms. While it might seem impossible to gain a sense of terroir from barley that is sourced from so many different places, Bruichladdich also has a vintage-dated whiskey with barley all coming from the same place. The Bruichladdich Islay Barley 2004 is all sourced from within about a mile of the distillery, it is one type of barley, one farmer, one southeast-facing slope. If any spirit is going be a pure expression of the terroir, it would surely be this one, wouldn’t it? I’ll let you decide.

Going back to the original question at hand – Was the uniqueness in the rum an expression of the terroir of the spirit or not? – I remain undecided. With wine, the defining essence of land speaks through the minerality, i.e. blue slate in German wine or volcanic minerality in Sicilian wines. As discussed, there are more factors that can comprise one’s perception of terroir for a spirit. Perhaps the terroir of the rum I tried is expressed as a menagerie of all of these factors. While a tequila’s terroir may be more heavily expressed through the soil and elevation of the agave, whiskeys are characterized by their water and place of aging. One conclusion I have made is that spirits and wines have one thing in common: not all of them are terroir-driven. There are some spirits that give a sense of place, and others that do not.