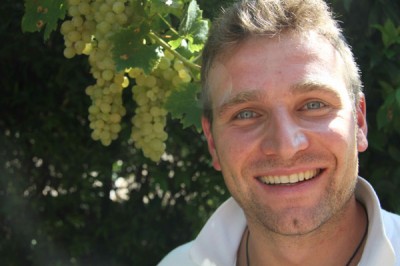 So they told me that most Italians will carafe this sparkling wine, this natural Prosecco called “ProFondo.” How interesting to sample the next wave in Italy’s sparklers, wherein the producer both bends the rules and improves upon them. This notion defines Andrea Miotto and this is why his wines are important. Important not in the stiff, history-making sense of the word, but with the idea that it’s valuable to take a step outside the expected. And his wines are darn good to boot!

Azienda Agricola Miotto began in the late 1970s with a minuscule family farm in Treviso, located within Valdobbiadene – in the heart of Prosecco territory. Over the years, the farm expanded to nine hectares, run with crazy passion and hard work. Andrea claims that his wines are to be a careful cohesion of modern knowledge to time-honored techniques. He intends the taster to experience the history of a land and people, all within a glass of white wine: a tall order for a sparkling wine normally so commercialized as Prosecco.

The Prosecco region DOC (Denominazione di origine controllata or “Controlled designation of origin”) recently went through some upheaval. Because of mass commercialization of Prosecco, in 2010 the producers within the approved, traditional Prosecco regions lobbied for a name change. Glera, one of the grape varieties in this classic style of wine, now has replaced the grape name “Prosecco.” So, “Prosecco” now refers to a precise territorial region of northeastern Italy, including seven provinces of the Veneto and Friuli, which includes Valdobbiadene-Conegliano – the steep sloped hillsides of quality Prosecco production.

Composed mostly of older vines, Andrea Miotto’s sundrenched, sloping vineyards sit on shallow soils atop a complex matrix of rocky subsoils: moraine, sandstone, and clay. From vine to bottle, he emphasizes the delicate nature of Valdobbiadene’s indigenous grapes and works cleanly and completely. His most prized Prosecco comes from Federa, a two-hectare vineyard. Wholeheartedly, I feel this is a new type of Prosecco grower in the Veneto, one who works as a farmer first and is proud to emphasize the distinctiveness of his region. With his skilled hand in crafting fragile, lacy, expressive Proseccos, Andrea Miotto is one to watch… and one to appreciate.

Below is a list of what you’ll find at Astor: three distinct styles of artisanal Prosecco from this young, energetic producer. Enjoy and cheers!

Prosecco “ProFondo,” Miotto 2011
A rare, captivating sparkling wine that is as food-friendly as they come. This Prosecco is one of the few wines still made in the old “sur lie” method, meaning it underwent two fermentations, the second of which took place in the bottle. It is a Col Fondo Prosecco, which literally translates to “with sediment”: the yeast cells were not removed through filtration. Bone dry, this has a delicacy that complements seafood, light meats, and even aged goat cheeses. Store chilled, serve chilled, and keep upright for several hours before serving to keep the mild sediment (spent yeast) at the bottom of the bottle. Traditionally, in Italy, one would pour the Prosecco into a carafe to separate the wine from the lees before drinking, but many New Yorkers are happy to drink their Prosecco cloudy.

Prosecco “Federa” Extra Dry, Miotto NV
One of the greatest Prosecco wines to hit our shelves! This is quite simply a great match for just about any food, be it salty or spicy. There are gorgeous aromatics on this sparkling wine; creamy and floral aromas align with a gossamer texture and a very friendly palate that will be a hit at any gathering.

Prosecco (Still) “Màscheri,” Miotto 2011
This is not your average Prosecco: it is a still (not sparkling) white wine. In the glass, notes of flowers and fresh citrus emerge over a smooth, palate-coating texture. Chiseled, chalky acidity cuts through to the finish. This white is a pleasingly nuanced partner for any number of rich fish dishes – I especially love it chilled and served alongside sushi, Japanese dumplings, or brunch!