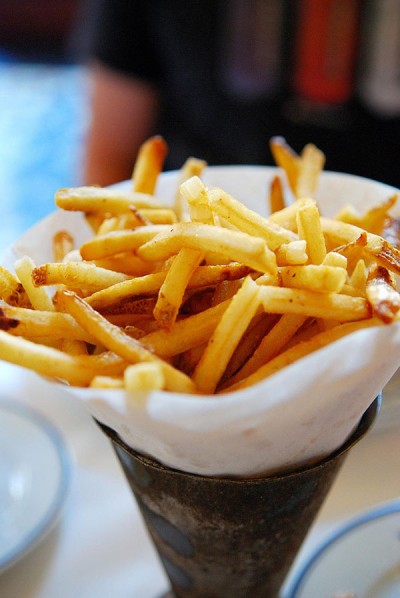 A while ago I was having a conversation with a colleague about how to tell if a person has “basic cooking skills”. I stated that I like to ask them “the proper way to cook a French fry”? This question continued into a much deeper conversation about how there is not only one way to skin the proverbial cat. The premise of the question was based on the assumption that an “uninformed” person would say simply, “You place cut potatoes into hot oil and fry them”. Common wisdom shows that this will yield a French fry that is either cooked perfectly on the outside and raw on the inside or burnt on the outside and cooked perfectly on the inside.

So then what is the answer to this question? Well, the fact is there are several. (Please note that these are not meant to be recipes or any type of instructions; rather, they are descriptions of methods. For most of the methods explored in this article, more detailed instructions can be found through a good ol’ internet search.) Bon appétit:

Method 1 (The Classic): The classical method of the perfect Pomme Frite is a two-step frying. Step 1 is to “oil blanch” the potatoes at about 250˚ F. This step cooks the potato through but is not really hot enough to render them crispy and golden brown. This is where Step 2 comes into play. Here we fry the potatoes at 375˚ F. This step cooks them on the outside and gives us the French fries that most of us know and love. This is the technique that most restaurants use. Everything else is considered to be a bit “rogue”.

Method 2 (The Health Fry): Perhaps “health” is the wrong word, but for all intents and purposes it is healthier than the “Classic Method”. This is another two-step process wherein you pre-bake the potato in Step 1. Then in Step 2 we fry them as normal to crisp them. The pro of this technique is that it will render less greasy fries, and I find them to be a bit lighter and crispier than the Classic Method. The con is that it is more time-consuming, which, depending on what else you have going on, may work to your advantage.

Method 3 (The Heston Part1): Named after the chef that introduced this technique to the world. That person is none other than the renowned chef at one of the most lauded restaurants in the world, the Fat Duck (in Bray, England), Heston Blumenthal. In Step 1 of Heston’s basic technique we boil the potatoes in water… That’s right, simple water. This process disrupts the surface of the potatoes, causing it to blister. This is a good thing because it increases the surface area of the “chip” thus increasing the potential for crispiness. After this, Step 2 is to remove them from the water and place on a drying rack. From here it only gets more esoteric, but please follow me (as this is by far the simpler of his two techniques). Step 3: Place them in the refrigerator to both cool down and dry (please be careful, as this will likely throw off the temperature in your refrigerator). Step 4: Take the boiled and cooled potatoes out of the fridge and place them into 250˚ F oil and cook through, being careful not to let them brown. In Step 5, you want to drain and cool them again. Finally in Step 6, you want to fry them in 375˚F oil.

Voilá. If you’re patient (and masochistic enough) to actually follow this to the “T” all of your hard work will certainly be rewarded with what will probably be the best French fry you’ve ever had. That is, of course, unless you’ve eaten at the Fat Duck in the last couple of years…?

Method 4 (The Heston Part 2): Ok, now I am not going to even try to get into too much detail about this technique. Quite frankly, it is way too convoluted and (almost) no one will try this (not even me and I am extremely geeky when it comes to food). Heston essentially sous-vides the potatoes with a simple salt water brine trapped alongside them in the bag. All the while he is bombarding them with ultrasonic waves. This works by causing tiny fissures to form in the surface of the potato as well as breaking down the pectin in the potatoes, making them more tender. This is similar to what was done by boiling in the previous method, but far more precise. Your next step is to fry in oil at around 340˚ F and then again at 375˚ F to crisp. During these last two stages something truly fascinating happens. The liquid that was forced into the fry during the sous vide phase begins to boil and expand, forming tiny air pockets. The inner consistency of the final fry is something approaching mashed potatoes or Pommes Dauphine, while the outer texture is nothing short of astonishing. I promise you’ve never had anything like them. They are truly an experience!

Method 5 (Le Classique Nouveau): I call this technique “Le Classique Nouveau” because it is so simple that it’s arcane but totally innovative because it flies in the face of classic culinary “thought” – oh, and it was developed by a French guy… none other than Joël Robuchon. You begin by placing the potatoes in cool oil and letting the temperature rise slowly until it reaches 375˚ F and the potatoes brown. At this point the fries are done (?… My thoughts exactly).

I find it quite fascinating to think about the range of possibilities there are in producing the “perfect” French fry. Its greatness lies in its simplicity. Somehow our love affair with French fries has compelled us to go to such great lengths and conceive of the almost unimaginable, to achieve something that’s a little bit better than it was ever before. Something so humble, embraced by the world’s greatest chefs and elevated to the status of haute cuisine. Perhaps this is a metaphor for something much more serious, but I doubt if it would be anywhere near as delicious.

What better to drink with French fries than sparkling wine?

Here are a few sparklers to drink with some of our favorite French fries (with condiments):