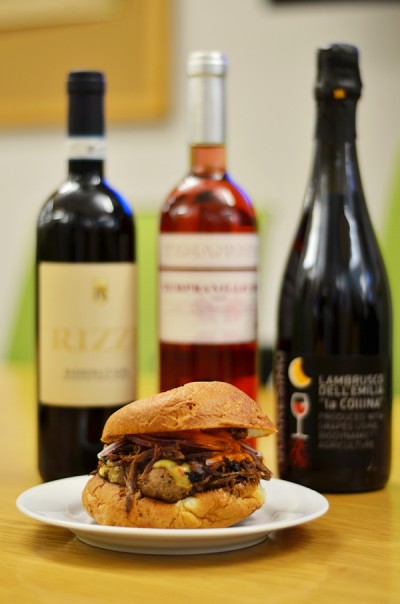 National Burger Day is upon us, and there’s nothing we love more than a good, celebratory food holiday. Hamburgers may not be American in origin, but they’re one of our adopted national comestibles. If you’re used to seeing your char-grilled version alongside the coldest can of domestic, we’d like to take a moment to plead our case for a fine and overlooked companion to a standout burger.

In other words: Don’t forget the wine.

We paired three wines with these burgers, beginning with the 2013 Yemanueva, a Tempranillo-based rosado from Bodega La Terica in Spain’s La Mancha region. This wine was spicy and rich on the nose and had a full, robust palate that we believed would hold up to either burger, even the latter, which was saltier and fatter than the more traditional variety. But we were disappointed to find that the secondary notes—floral and layered as they were on the nose—were lost to the looming flavors evident in these burgers. This wine was not, sadly, the winner of the day.

Next up was the 2009 Rizzi Barbera d’Alba, a bright wine from a rich vintage that held its own in the company of both burgers, though it seemed to perform better when paired with our bare bones, traditional specimen, highlighting the nuances of all that pickled, oniony flavor that flattop American burgers are known for. This is a rustic wine made for rustic cuisine, so it was not terribly surprising to see this performance play out to modest success; the full vintage helped, too, emphasizing the fat on the back palate. This earthy, dusty wine followed through to the palate with and without food, and it was satisfying to see it open up in the presence of food.

But the sure winner of the day was the La Collina “Quaresimo” Lambrusco, a deep purple sparkler from Emilia-Romagna with just enough residual sugar to mitigate the salt in all those deep fried bits of our gourmet friend—and just enough effervescence to make our happy little American cheese-bedecked burger rise to the occasion. On its own, this wine might create a little palate fatigue, but with food, it’s the perfect complement, a blend of acid, sugar, and fruit that begs for a salty, meaty, fatty meal to partner with.

So celebrate the holiday with us by indulging in these pairings or in one of your own invention. Happy National Burger Day!