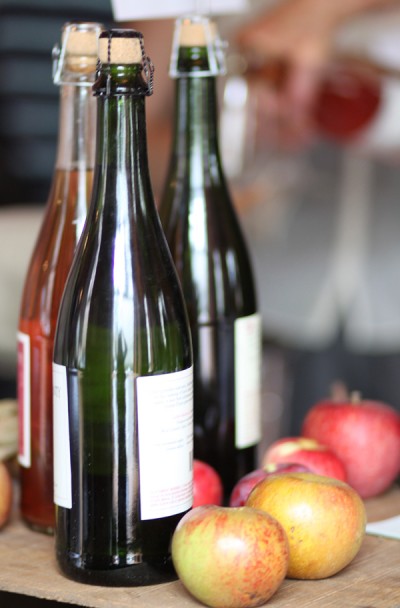 So it’s Autumn; cooler temperatures, colorful leaves and shorter days augur fall feasting, the last of summer’s bounty, squashes, pumpkins and of course apples. No other fruit can claim to be as American as the apple. After all, there is so much evidence that apples are intrinsic to our Americana. For example, take the legend of Johnny Appleseed, who spread apple pips near and far over the Mid-Atlantic States, contributing to the impression that apples were wholesome and important. (Plus, he left orchards filled with diverse apple varieties, many of which are now heirlooms and hard to find today.) And we have a plethora of quaint old-timey folk sayings, like “An apple a day keeps the doctor away,” “Apple of my eye,” and “An apple for the teacher,” wherein the student is attempting to curry favor, with a toothsome, healthy snack, I suppose.

Yes indeed, the apple is manifest in its natural form everywhere as we start to don flannel, crunch through the woods drinking in the delicious smoky air wafting from disparate homes in the countryside, and indulge in more baked desserts than one can name. “As American as apple pie” says it all. But then there’s cider. Cider-making exists everywhere apples grow. In the United States, as goes the story with other alcoholic beverages, cider experienced some hard times during the Temperance movement and Prohibition from the late 19th century to the early 20th; young people also moved to the cities for jobs, leaving behind the family farms and abandoning generations of cider-making experience. Though cider became uncool then, happily for us, especially in the Northeast, real cider is back.

Cider (known as well today as “hard cider” because an unfermented, unfiltered version of apple juice has usurped the proper name of just “cider”) likely originated in Normandy, France. When William of Normandy invaded England in 1066, cider tradition crossed the Channel as well. English ciders have a lot in common with Normandy ciders – both are dry, fuller in style and naturally tannic. Normandy ciders have a more rustic, barnyard, “this is France!” kind of appeal, while English dry ciders seem more an alternative to beer: though they are much sharper in acid, with tannins to boot, they have fuller flavor. The Puritans brought apple seeds over to the New World as well as cider-making technique and the rest is American history. In the colonial era cider was safer to drink than water. No matter the food served at the first Thanksgiving feast, cider was drunk. Later in the 18th century any decent country or city-dwelling host would offer guests a cider; Thomas Jefferson kept cider well stocked at Monticello (near the Château Margaux, I’m sure) and cultivated many cider-making apple varieties.

Fast-forward into the thick of the present and real cider-making is having a renaissance. New York State is happily leading the pack in farmhouse/craft cideries; the locavore movement, ability to sell ciders at farmer’s markets. New York’s bounty of apple orchards and state support of orchards and wineries have helped buoy an enthusiastic sub-culture of craft or farmhouse cider-making.

What makes a farmhouse cider? This is not so difficult: First of all, you have to use traditional cider apples. Some are European, some American, but all tart, sharp, with varying levels of sweetness, and sometimes tannic. All are really not so pretty, more knobbly, dented and less than pristine. During the dark times of Prohibition and as many orchards fell into disuse, cider apples, diverse apple varieties were pulled up in favor of more profitable supermarket, shiny-for-the-shelf, sweet apples, which also went into apple juice that was filtered bright for commercial appeal. There are four general groups of cider apple: Bittersweets, Bittersharps, Sweets and Sharps. Bittersweets contain high tannins, sugars and a wide breadth of deeper fruit notes. Bittersharps are critical for acids and for tannins. Then there are Sharps – high in acid, lower in tannins; and Sweets, great for eating because of higher sugars. Most ciders will be a masterful blend of the above in the style of the cider producer and region from which it came.

We intrepid Americans put our own spin on tradition, reinterpreting a process that was lost and now re-found. Below is a bushel of cider-makers who are leading the charge with their definitions of authenticity; they are darn good and tasty. I know what I’ll be drinking as the weather turns sharp and emboldened leaves turn crimson, orange and brown; it will be cider and lots of it with funky, aged cheeses, through to the last morsel of leftover Thanksgiving turkey (and likely beyond).

Some picks of the season, right on time for Cider Week in New York!

Eve’s Cidery, Finger Lakes
Eve’s Cidery is a small family-run orchard and cidery located in Van Etten, in the Finger Lakes region of New York State. They grow apples and other tree fruits and ferment artisanal ciders. The Rustica is semisweet and offers a blend of Granny Smith, vanilla and warm spicy flavors. The Bittersweet is a blend of English, French and American cider apples. Semi-dry, it is more earthy and complex with more robust tannins.

Aaron Burr Cidery, Hudson Valley
From a cider purist and outspoken proponent of cider’s place in American history, Aaron Burr Cidery offers a piece of history. In notoriously small quantities, you can find Hudson Valley Golden Russet Cider. Golden Russet is an American variety, one of the few cider apples capable of holding its own as a single-varietal cider. Get it while you can!

Bellwether Cidery, Finger Lakes
Cheryl and Bill Barton started Bellwether Cidery on the west side of Cayuga Lake in 1999. Various excursions through the cider regions of France and years of “research and development” as home cidermakers inspired them to launch their own cidery. This is the first and Original cider from Bellwether. Bill Barton aims for more acidity and less tannin in his ciders. Balanced from beginning to end, crisp fall apples dominate the palate; the texture is lacy and does not overwhelm.

Farnum Hill, Poverty Lane Orchards, New Hampshire
Steven Wood and Louisa Spencer are a part of the original advocates for true farmhouse American Cider. All their ciders have their own personality. The Extra Dry is, as the name suggests, very dry and earthy and astringent. The Dooryard is an old/new idea, according to Louis and Steven, inspired by the lively business old cideries and orchards did in their “dooryard.” Tannic, bigger and dry with a solid apple personality, this is an assertively robust cider. Kingston Black Reserve is a still cider. Kingston Black technically is a “Bittersharp” apple variety. It is shines with food and is worth trying a buckwheat galette with Gruyère cheese and mushrooms.

West County Cidery, Northern Berkshires, Massachusetts
The Maloney family — Terry, Judith, and Field — began making hard cider commercially in 1984, but were making cider for friends and family well before that. Their style is tart, high-toned and delicate.
Pippin is named for the pips of apples and a salute to John Chapman (Johnny Appleseed) who grew seedlings in his nurseries for the early settlers. Trees that produced worthy fruit were propagated and often named “Pippin”. Pippins make good cider with bright fruit aromas and a tangy flavor, just like this one. The Redfield comes from a unique red-fleshed apple, also tangy and bright.

Cidre de Normandie, Normandy, France
The aroma of this cider brought me back to Normandy directly, sitting in a ramshackle crêperie with a galette crinkled and burnt at the edges. It is Norman proper, a little cloudy, lightly sparkling, completely traditional, unpasteurized, and showing a hint of barnyard. Wild and lean, from traditional varieties of Normandy apples, there is texture, a slight bitterness, earthy tones and grip. Père Jules was the cidery patriarch, born in 1893. Guillaume Jules took over the family business in 2002; he is fourth generation.

Aspall, Suffolk, England
Aspall is an old, traditional English cidery with over four generations of experience. Their ciders are based on apple trees introduced from Jersey initially for the use of the Chevaliers of Aspall Hall. Orchard apples, fresh-picked and fermented naturally with light filtration, are strongly apparent on this Old World nose and palate. Smoky, rustic and with firm bubbles, it is a dynamic, deep cider.