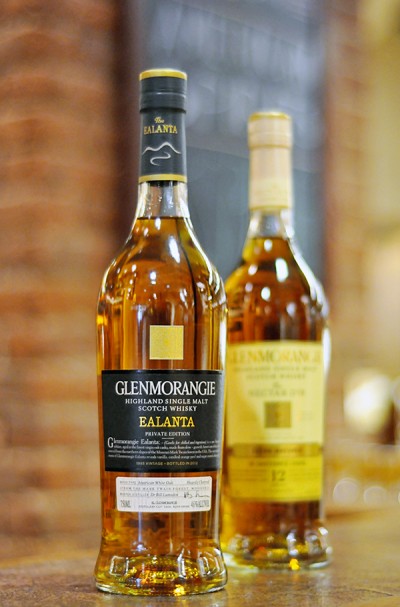 On February 19th, 2013, I went to the Crosby Street Hotel for the New York launch of the latest addition to the Glenmorangie “Private Collection”, the Glenmorangie Ealanta. The whole event was a pleasure to be involved with and I wanted to share my experiences with you, whilst revisiting some of the excellent Glenmorangie single malts currently available.

As the guests arrived we were first offered a cocktail crafted from the Glenmorangie Original 10 Year Old stirred over ice with Tia Maria and a dash of chocolate mole bitters, and served with a maraschino cherry. This was really quite nice. The citrus and coconut elements of the 10 Year played very nicely off the cherry notes in this well-balanced drink.

The Glenmorangie Original is an extremely well-made Scotch and is a base for the vast majority of everything else that is released from the folks at Tain. They use a very, very lightly peated 100% Scottish malt. The water comes from the Tarlogue Spring, which is a hard, mineral-rich water source full of calcium and magnesium salts. These properties create conditions that lead to a powerful fermentation. Glenmorangie is one of only two distilleries (the other is Orkney’s Highland Park) that have a hard water source. The tallest stills in Scotland, which run constantly for 48 weeks a year, go on to produce what is in essence a 2.5-times-distilled spirit that has light fruit-forward properties. The new-make spirit is then aged 10 years in ex-Tennessee Bourbon barrels, which give the whisky those trademark vanilla and coconut characteristics. 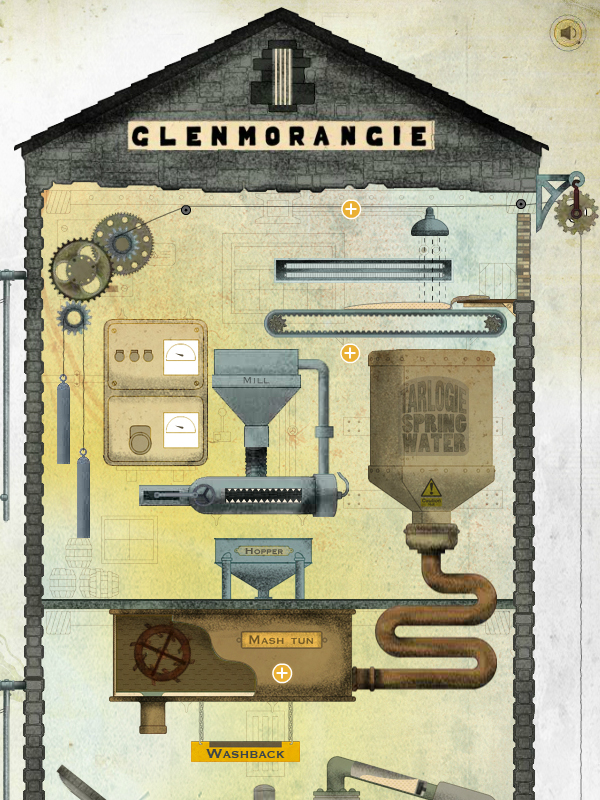 Visit www.glenmorangie.com to check out their fantastic “Water to Whisky” animation.

Under the direction of Dr. Bill Lumsden (Director of Distilling, Whisky Creation and Stock), Glenmorangie have pioneered the use of specialized barrel finishes. This is the technique of taking their 10 Year Old Original and further maturing it for a minimum of two years in different types of European wine casks. The current portfolio includes the Lasanta, which utilizes Sherry casks. The Quinta Ruban is extra-matured in Port casks, and then there is the Nectar D’Or, which was created following the success of the extremely limited and expensive Glenmorangie Pride release, which used the famed Château d’Yquem Sauternes casks.

The Nectar D’Or was served to us after a tasting of the Original, and I had mine in Dr. Lumsden’s favorite way, over ice. I had honestly forgotten how darn nice this whisky was. The nose was full of sweet citrus, lemon meringue pie, and yummy honey. The palate showed pineapple sponge cake, French oak notes of clove and star anise, and again, wonderful pure citrus fruit notes. The Sauternes wood here is really working its magic.

Then it was time to learn about The Ealanta, the fourth whisky in the annually released “Private Collection”. Ealanta is a Scottish Gaelic word meaning “skilled” or “expert.” In this case it is Dr. Bill Lumsden who is the skilled expert, since he shepherded this originally experimental batch of 156 prototype casks to us in an exceptional manner. The new-make spirit here does not see any of the ex-Bourbon barrels. It has been aging since 1993, 19 and a half years, solely in heavily toasted virgin American oak. A mistake on the bottle’s label which states that it is heavily charred as opposed to heavily toasted, and the unique and special conditions surrounding the maturation, are key to understanding how such a delicate and nuanced spirit can survive and indeed thrive in these casks. The toasting is key as there is no direct flame contact; just high heat. Think of how a toaster cooks your bread, as opposed to trying to make breakfast with a blowtorch! Heavy charring exposes many more layers of wood, making the staves much more porous, and obviously, charred wood has much more color to impart. The nature of heavy charring is a legal requirement and in many ways essential to Bourbon producers. So the heavy toast used in the Ealanta casks opens up just enough of the wood layers for the whisky to gently soak in, and removes unwanted flavors that would come from an untreated surface. Then there are the special dunnage warehouses, with open earth floors (plenty of humidity) and barrels stacked a maximum of three high (plenty of air moving around and through the barrels). This damp environment creates conditions that balance out powerful oak influences.

So, after our 30-minute presentation on the Ealanta, it was time to taste and see what all this meant. What would the whisky taste like? It didn’t disappoint.

The color a beautiful and deep mahogany. The nose full of beautiful butterscotch, creamy vanilla, and baked citrus. The palate rich and full of toffee, maple, pecan, and delicate wood spice. Then there is something else special happening here, a hint of effervescence, while the addition of water brings out a very refreshing minty tone that really creates a beautifully clean and delightful finish.

This release follows the original Sonnalta PX, the Finealta and the Artein. There were only 3550 cases produced, but with 50% of those coming to the US, you have ample, but not masses, of opportunity to sample what I think is the best so far and retails here at Astor for an extremely reasonable price.